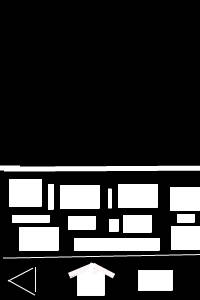 The Homescreen Launcher,and keyboard app in Google Android can use up a lot of RAM and CPU resources running in the background. The high RAM and CPU usage can make some games, and apps like web browsers run slower, and make those not responding error messages with the close and wait button show up more often.

If you need your device to use as little RAM and CPU cycles as possible without rooting your device when playing an intensive 3D game like Gameloft’s Dungeon Hunter V and Asphalt 8, switching to a very basic lightweight launcher, and keyboard would make games, and apps have more RAM, and CPU cycles for running games and Apps.

You need to use two fingers to pinch to zoom on Null Launcher’s homescreen when you want to switch to another launcher like the default launcher which is installed on Google Android.

Null Keyboard is a useful app for disabling the keyboard in Google Android which is useful if I don’t need to type like playing a game, or watching a video. Null is also good for using to stop a keyboard from popping up when you type with a physical keyboard which is connected to your device by USB, or Bluetooth. Null Keyboard sometimes uses as little as 3 MB of RAM when I check the Running processes in Google Android’s App settings in Android Settings App.

Changing my launcher and keyboard to Null Launcher, Slide Launcher, and Null Keyboard help make games not slow down as often especially on racing games where there are a lot of moving cars on the screen at the beginning of the race which slow down my tablet’s frame rate where the video freezes for a few seconds at the beginning of levels when I use a more heavy launcher, and keyboard with a lot of features, widgets, and fancy themes.

When I use Null Launcher, Slide Launcher Big Button Keyboard, and Null Keyboard, I get fewer random crashes, freezes, and error message when using more intensive apps like web browsers which can use hundreds of MBs of RAM, and a lot of CPU resources when visiting Full desktop websites, and watching HD video on video sites.

I also use Null Launcher, and Null Keyboard when I charge my device’s battery while it is powered ON, so my device uses less power while charging, so it should charge faster. Using Null Launcher, and Null Keyboard also seems to extend my battery life because they both use very little RAM, and CPU resources, so the battery does not need to provide as much power to power my RAM, and CPU.

I also use No Wallpaper which is a wallpaper app which replaces my Wall Paper with a Black color screen, so my device does not need to display a high resolution picture or animated live wallpaper, so No Wallpaper should help me save some battery life, RAM, and CPU resources when I am at the homescreen.