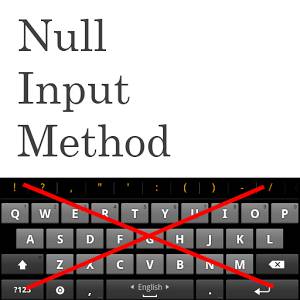 Null Input Method is a free invisible keyboard app for Google Android which disables the onscreen keyboard from showing up when you tap on a text box on an app. This App is good for using when you use a keyboard, or keyboard remote on a laptop, netbook, PC, or settop box like those Google Android on a stick PC. It is also good for when using a real Bluetooth or USB keyboard connected to an Android desktop PC, tablet or smartphone. The onscreen keyboard will no longer pop-up when you type with a real keyboard on your device when you use Null Input Method.

This is also a good keyboard for devices where you don’t want people to be able to easily change the on-screen text being displayed on a sign like those screen saver apps which let you type out a scrolling text message to display on the screen for people to read, and prevent the screen from burning in an image on the screen.

Once you switch to Null Input Method, you can easily get back your regular onscreen keyboard by tapping on the keyboard button on the navigational bar on the bottom of Google Android, or by taping and holding your finger or mouse cursor on a text box until the keyboard selection box appears again. You can also use the Language and Input Settings App to change keyboard apps in Google Android.

If you are running low on RAM, or don’t need an onscreen keyboard, using Null Input Method could make your Google Android Apps and games run faster because your device would have more free RAM, and CPU resources to use to run apps, and games.

Null Input Method App size is 23K in size, and it is compatible with Google Android 1.6, and up.

It downloads, and installs very quickly from Google Play in my experience.