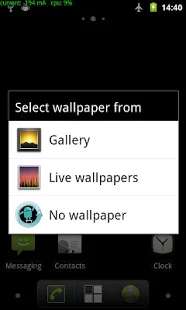 No Wallpaper App is a simple to use App for changing your homescreen and lockscreen background in Google Android to a solid black color instead of using a picture as a wallpaper, or a live animated wallpaper. No Wallpaper is only 17K in size, so it only takes a few seconds to download, install, and run. It uses very little storage space once it is installed.

If your smartphone, tablet or monitor/HDTV which uses an OLED display, you’ll save some battery power, and electricity. I can also set your brightness lower, and I can still see the shortcut icons’ text on my homescreen, and lockscreen because the text is white, and the background is black, so it is easy to read compared to having a lighter color background, and white text which is harder to read.

The Google Nexus One saves about 30 mA of current after switching to No Wallpaper as the wallpaper.

I like using a fully black screen as a wallpaper is that it makes my tablet’s homescreen and lockscreen have a sleek black design. I also don’t have to find a wallpaper which looks nice with my launcher, and devices design.

It is very easy to change your wallpaper to “No Wallpaper to solid black” by just installing the App, and holding your finger on the launcher to change to No Wallpaper in the Wallpaper menu or settings for your launcher.

I think using No Wallpaper may save some RAM, and CPU resources compared to using an image or live wallpaper which can be hundreds of KBs to many MBs in size compared to No Wallpaper which is 17K in size, and your device does not need to display an image, or run as app to animate a live wallpaper. Using less CPU and RAM will make your device run cooler, and use less battery life because it won’t be running as many tasks at higher speeds. Your other apps also has more free RAM, and CPU resources for running apps like web browsers, social networking, and mobile games if No Wallpaper use less system resources than a regular or live wallpaper.

No Wallpaper is a simple use Black Wallpaper App for turning your wallpaper black on the Google Android wallpaper, and you may also save some battery life.

You can download No Wallpaper app from Google Play at https://play.google.com/store/apps/details?id=no.wallpaper