A lot of the time new operating systems like Windows 8, 7, and Vista don’t run well on very old computers. But, Linux based operating systems like Linux Mint, Puppy Linux, and Lubuntu would run great on slower computer because of the lower system speed requirements for RAM, CPU, hard drive, and video cards needed to run Linux based operating systems. Using an older version of Windows, Mac, etc is unsafe because it is no longer supported with security updates, and patches because Microsoft and Apple decided to not support it anymore, so using Linux on an older computer is safer, and faster. Puppy Linux, and other Linux operating systems can run on computers with 256 MB of RAM or less , a single-core 1.4 GHz or slower CPU, 60GB or less hard drive space, onboard video, and sound.

A lot of Linux based operating systems don’t even need a hard drive installed on a computer because they can run off a CD, DVD, or USB storage device with a Linux based operating system image file burned, or written onto a CD/DVD, or USB storage device like a USB Flash drive. If you have a broken computer with a broken hard drive, but it displays the startup image and text when you turn it on, you can use the computer to run Linux from a CD/DVD or USB flash drive.

Linux now has a lot of good software which can run on Linux like Firefox, Google Chrome, LibreOffice, OpenOffice, Mplayer, SMplayer, Steam, Gimp, XBMC, and other software, apps, and games for it, so you can use Linux for doing tons of tasks like watching video, listening to music, web browsing, office work, etc. Most of the software for Linux is also free to use.

Linux is also safer from virus and malware infections compared to Windows, and Mac because Linux users download programs from a software center which does not contain viruses, and Linux users are not login as administrator root users all the time like Windows.

I used Puppy Linux on an older computer, and it started up pretty quickly. It also ran pretty well on an older desktop with 256 MB of RAM, a single-core 1.4 GHz CPU, 60GB hard drive, and an older dual core AMD laptop. I think Puppy Linux may also work on very old computers with 128 MB or less RAM, and a 500MHz CPU, and 1GB or smaller hard drive. It does not use much storage space on my hard drive, and there are a lot of programs like Gimp, Firefox, and Adobe Flash Player. Puppy Linux also can be used on a USB flash drive, or CD/DVD disc by setting your computer up to boot from a CD or USB storage device before booting to a hard drive. The desktop in Puppy Linux is like Windows desktop, so learning to set up the internet to go online, and using programs is pretty simple.  Programs running in Puppy Linux seem to run pretty quickly, and stable. Puppy Linux also shutdowns, and restarts pretty fast.  There is also a Windows Installer version of Puppy Linux for Windows 7 and below which let you use Windows to install Puppy Linux on Windows which gives you the option of starting into Windows or Puppy Linux by installing a boot manager onto Windows.  If you don’t like Puppy Linux, you can easily remove Puppy Linux by using the uninstaller program found in the Program and Features program in Windows, or you can use a program like Iobit Uninstaller, or Revo Uninstaller to uninstall Puppy Linux from Windows. 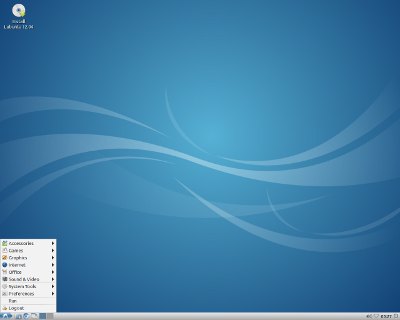 Lubuntu is similar to Puppy Linux, but it is based on the popular Ubuntu operating system, so it gets updated to the latest version at the same times which Ubuntu gets updated to the latest version. It can also be run from a startup CD, or installed on a hard drive like Puppy Linux. In my experience, Lubuntu only uses about 200MB of RAM, and 1% CPU resources on my less old computer which has a Dual-core 1.86GHz CPU, 3GB of RAM, 320GB storage space, and Nvidia GT 620 video card. Lubuntu uses more system resources than Puppy Linux, but runs faster than most current Windows operating systems like Windows Vista-8.1. Lubuntu uses the LXDE desktop environment which is faster, and runs better on slower computers than Gnome, and Unity on the regular version of Ubuntu. Lubuntu also works with a lot of software titles, and it is easier to find .deb Debian installer files for programs which are not found on Lubuntu Software Center. I installed Firefox, SMplayer, VLC Player, Gimp image editor, games, and many other software titles onto Lubuntu. I feel that Lubuntu is better for gaming, and video tasks because I notice Nvidia also releases more recent Nvidia video card drivers to the Lubuntu additional Drivers section, so games, and video run better than using the regular non-Nvidia drivers on other Linux operating system. Steam for Linux should also work well on Lubuntu because Lubuntu is based on Ubuntu. Ubuntu is one of the Linux operating systems which is supported by Steam. Lubuntu is also very easy to update software which I installed on it with the Lubuntu software updater which can also be used to upgrade to the latest stable release of Lubuntu’s operating system which Lubuntu released online. Lubuntu is not the lightest operating system, but it is easier to use, has more features, and has a lot of compatible software, and hardware for it. The user interface also looks nice. 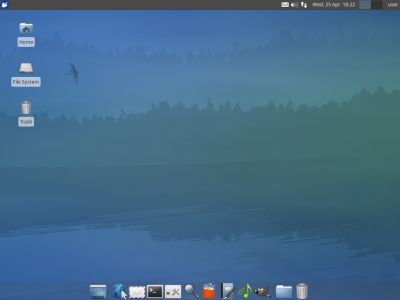 I used Debian on the Raspberry Pi, and it ran pretty well on the Raspberry Pi which uses a 700MHz mobile chip, and 512MB of shared memory which it also shares with the video chip. I found using Debian on the Raspberry Pi pretty simple for doing tasks like web browsing, listening to music, and watching video. Debian had a lot of compatible software like Kodi Media Center, LibreOffice, VLC player, LXPlayer, Midori, Chromium, and Firefox. Debian is the operating system which Ubuntu and other Linux based operating systems are based on. Debian 7 desktop version only needs 128MB of RAM if you use it with a desktop environment instead of No Desktop which needs 64MB of RAM. You also only need a 1Ghz CPU, 1GB of storage space for no desktop, and 5 gb without a desktop for Debian to run. Debian is harder to use, but it is very lightweight compared to other desktop Linux operating systems. It also has a lot of compatible software for it. If you are a more advance user, or you want to learn more about the advance features of Linux like command lines, Debian is a good operating system for you and your older computer. Debian also comes with fewer bundled programs compared to other Linux Operating systems which comes with a lot of bundled programs pre-installed.

Tiny Core Linux – One of the smallest and fastest Linux Operating Systems for older computers. 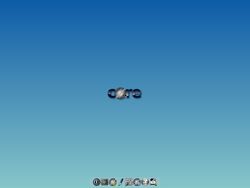 Tiny Core Linux is only 15MB in size for the Wired internet version which also come with FLTK/FLWM graphical user interface desktop. It only needs 46MB of RAM to run, i486DX CPU, but a Pentium 2 is recommended. It does not come with a lot of programs which come pre-installed, so you will have to learn how to install them yourself, and customize Tiny Core yourself. It can also be run from a startup cd or dvd like other Linux operating systems. Tiny Core Linux is probably best for text editing, web browsing, and simple tasks instead of more advance tasks like gaming, video editing, and multimedia where Lubuntu is better for advance tasks. 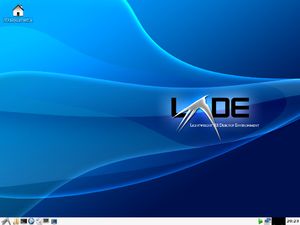 Knoppix is a great bootable Live CD based Linux Operating system which users can run from a Live CD/DVD disc, so it does not require installation. Most computers with processors like a i486 or later Intel Pentium 1-4, and 32 MB of RAM for text mode, at least 128 MB for graphics mode with LXDE can run Knoppix. You’ll also need a CD-ROM drive to boot into Knoppix It comes a bundle with a lot of software like Konqueror web browser, KOffice, Gimp image editor, media players, and other software to use. The DVD version of Knoppix contains OpenOffice.org, Abiword, The Gimp, Konqueror, Mozilla, Apache, PHP, MySQL, and hundreds more free software programs on it. It is also based on Debian, and uses the LXDE desktop environment, so it should run pretty fast on older computers. It is a good OS for new Linux users because it comes with a lot of software, and it is easy to use. 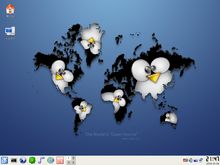 Slax is one of the smallest Linux operating system with a full desktop, and support for many software titles like Firefox,  Chrome, etc. You can also add more software to your Slax  liveCD before you make it. It has many compatible modules from different categories like Networking, artwork, graphics, games, etc for adding more software, and tools to Slax. Slax is based on Slackware Linux. It works on all Intel, and AMD based CPU, i486 CPU, and only needs 256MB of RAM for running KDE desktop, and 48MB of RAM for text mode. You also need a CD-ROM or computer which can boot from USB to run slax from an external USB drive.

AntiX is designed for new and advance Linux users with older computers. It should run on most older computers even computers with 64MB of RAM, and a Intel Pentium II 266 system according to its website. 128MB of RAM is recommended, and it needs 2.2 GB of hard drive space if you choose to install it instead of run it from a LiveCD. It is based on Debian Testing Linux. AntiX also has a special edition of the XFCE desktop environment available for use.

Remix OS is a free Google Android Desktop operating system which let you use Google Android apps, games, and services on a desktop computer with a keyboard and mouse. Remix OS can have multiple movable windows opened on one desktop display. You can maximize, minimize, and resize windows in Remix OS. It also has a startmenu, taskbar, and desktop. It is also very easy to download and install updates for Remix OS because it uses Over The Air Updates like a smartphone, or tablet running Google Android.

CloudReady use Chromium OS which is similar to Chrome OS which comes pre-installed on Chromebook laptops. Chromium OS is open sourced while Chrome OS is not open sourced. Using Chromium OS is similar to Chrome OS. Chromium OS has a desktop, resizeable, maximizable, minimizable, and movable windows, file manager, App launcher program which is similar to the Startmenu. CloudReady Chromium OS has re-sizeable windows, and can use the same apps which work on Chrome OS, and the Google Chrome Web browser.  CloudReady uses the Chromium web browser instead of the Chrome OS web browser. You can use Google Docs, and other similar web apps on CloudReady. CloudReady can run on most older computers made in the last few years. It is free for home users. You can setup CloudReady to dual-boot Windows, and CloudReady on a computer which already has Windows installed on it. The updates to the operating system are also automatically updated, so it is very easy to update to the latest version of CloudReady as new updates are released for the operating system.

Previous post: No Wallpaper App for Google Android turns Homescreen and lockscreen Background on Android to a solid black color