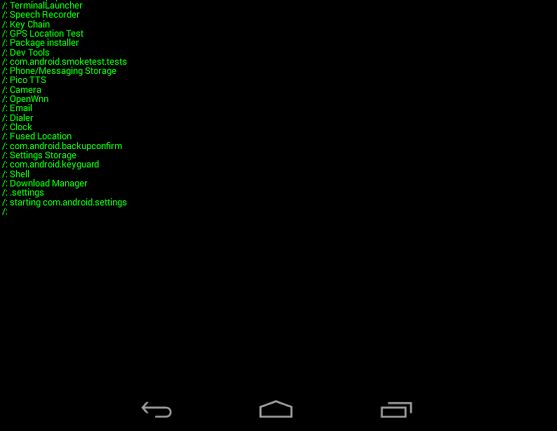 Terminal Launcher is a free Google Android Homescreen Launcher. It is totally command line based, so it uses very little RAM, and CPU resources like other command line based programs like Terminal in Ubuntu Linux, and Command Prompt in Windows.  It also uses very little battery life, or electricity. It hides the status bar, and is totally text based. If your smartphone, tablet, or Android device has bad battery life, and you want to save electricity on your Android settop box, or Android desktop or laptop, Terminal Launcher is one of the best launchers for saving battery life, and electricity because of its low RAM, and CPU usage which makes it use less power. It only uses about 7MB of RAM when I check Google Android settings > Apps > Running Apps > Show Cached Processes, so it would run quickly on smartphones and tablets with 256MB or less RAM, and a single core CPU slower than 1 GHz.Terminal Launcher is only 277k in size which is less than 1MB, so it also downloads, installs, runs, and uses very little storage space on your storage drive in Android because of its small file size. It works on Google Android 2.2 and up, and works pretty well on Android 4.4 when I use it on my Google Nexus 7 2012 tablet.

If your Google Android device like a laptop, settop box, or desktop does not have a touchscreen, it maybe faster to type out commands like .email to launch the Email app with a physical keyboard in Terminal launcher than using your mouse to click the Chrome shortcut icon on the homescreen, or all apps drawer which is designed for touchscreens, and not traditional desktop devices without touchscreens.

Using Terminal Launcher while playing mobile games may make games load faster, and run more smoothly because the games will have more free ram, and cpu resources to load the game because of Terminal Launcher low resource usage. Terminal Launcher is a good launcher for Google Android devices which are mainly used for one app like a file web server app, file sharing Wifi and Bluetooth app, slide show on a TV, video playback, etc because it uses very little CPU, and RAM, so the power usage is low. I sometimes even use Terminal Launcher when I am browsing the web, so my web browser has more free RAM and CPU resources to use for displaying websites.

It also does not have advertisements like other free launchers.

Terminal launcher can also protect your privacy from people who don’t know how to use Terminal launcher compared to regular launchers like the default Android Launcher where anyone who knows how to unlocks your phone can launch your social networking, e-mail, and document apps by tapping on an icon on your home screen, or All Apps, app drawer.

There is also a clear command which clears all your previously typed command in terminal launcher, so people do not know which apps you launched by reading Terminal launcher.

Terminal Launcher is also a nice looking launcher for people who are interested in techy stuff like the command prompt, Linux command prompt, and MS-DOS. I like the green text, and font style. It reminds me of old computers from many years a go.

Terminal launcher is pretty easy to learn how to use for me when I used it once I learned all the commands. I just need to remember that all commands should be in lower case letters, and to check my spelling.

To launch an App, I need to first type a ./period before I type the name of the app in all lower case letter. Also, if the app’s title has a space between two words, I need to press the space bar.

For example, to launch an App called Clean Master, I need to type a ./period first, and type clean master after the period with no space after the period in all lower case with a space between the word clean and master.

The completed launch command for Clean Master would look like .clean master

When I am done typing the command to launch an app, I need to press the return/enter key on my keyboard app.

There would be a short message that says clean master is starting after I press enter.

A good way of remembering to put a period before the app name would be to remember that adding the . period to the beginning of the line will form the letter L / :. with the colon on the left of the command before the / backslash symbol. Turning off auto capitalization, auto-correct and auto space  in your keyboard may make using Terminal launcher easier to use.

For example, typing textsize 16 will change the font size to 16 on the launcher.

The 0.99 cent paid version of Terminal launcher has two more commends which are

Terminal Launcher is a fast, lightweight, and nice looking launcher for Google Android devices like tablets, and smartphones where battery life, and performance is very important.

You can get Terminal Launcher free at Google Play at https://play.google.com/store/apps/details?id=com.jaggybuu.terminallauncherfree

Next post: No Wallpaper App for Google Android turns Homescreen and lockscreen Background on Android to a solid black color

Previous post: Doorways Launcher for Google Android a fast launcher which is text based with a shortcut dock