Null Launcher for Google Android is a Launcher which only displays your wallpaper, and does nothing 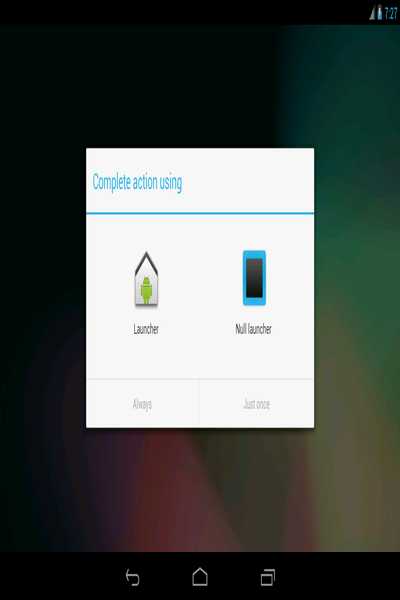 Null Launcher for Android is a simple to use Launcher app which only displays your picture wallpaper, or Live animated Wallpaper, but does nothing else.

Null can’t launch apps, and you can’t add widgets, and app shortcut to it. It also displays the default Android status bar with notification icons, and clock on the top of the screen, and the navigational buttons on the bottom of Android.

Null Launcher is useful for using with other apps like other apps which can launch apps where you can launch apps by swiping up from your on-screen home button like in Swipe Launcher, voice controlled apps like Google Now, and Lockscreen or notification bar launchers where you launch apps from the lock screen or notification bar. Null Launcher is also useful if you just want to just show a slideshow, picture wallpaper, a live wall paper, or you use Android where you don’t need to use the launcher, and rather save system resources like RAM, CPU, and battery life by not having a launcher. You can still open apps which are open on your recent apps section which you open by pressing the double rectangle button on the status bar.

To change your wallpaper in Null Launcher, you need to go to your Android display settings in Android Settings  which you can get to by swiping down on the status bar, and tapping on the settings icon where you can change the wallpaper in the Display settings with the Wallpaper setting in Display.

You can change back to the original launcher, and other launcher installed on your smartphone or tablet by going into your Android settings, and going to Home settings to change your home screen. You can also put two fingers on your screen, and pinch inward(pinch to zoom) on the Wallpaper on Null Launcher to change the homescreen launcher from the pop up menu with a list of launcher.

Null Launcher does nothing, and disable all other launcher apps when you set it as your default launcher. Using Null Launcher will help you free up RAM, CPU resources, and increase the battery life of your Android device.

Null Launcher file size is 12K which is smaller than the file size of most picture files on websites. It works on Google Android 2.2 and up, so it even works on very old devices, and newer devices.