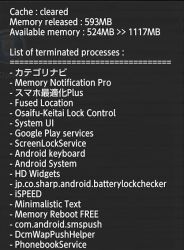 Fast Optimizer is a free System Utility App for Google Android. It is one of the simplest and smallest system utility apps for Google Android. It’s installer is only 35K to download, so it uses very little data, and storage space on your mobile. It also has no advertisement ads, so it won’t use up your data downloading, and displaying ads.

I use Fast Optimizer as my main system utility app because it launches quickly, and I just need to tap the Fast Optimizer shortcut, and it will clean cache files, and kill un-needed background apps in a few seconds. After it is done, it will close automatically, so I can quickly launch another app like a web browser by tapping its icon on the home screen, or App Drawer.

When Fast Optimizer is done cleaning Google Android’s app cache files, and killing background tasks, it will display a gray window with white text saying your Android Cache has been Cleared, and how much RAM it has freed up by killing background tasks. The available memory on your device.  After running Fast Optimizer my tablet seems to run more smoothly when scrolling up and down websites on my web browser, using apps, and playing games. It also list the names of the Background tasks and apps which it has stopped/terminated from running in the background.

You can download Fast Optimizer for free at Google Play at https://play.google.com/store/apps/details?id=jp.snowlife01.android.optimization