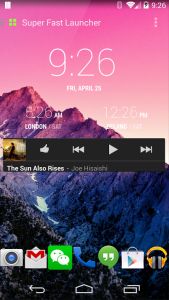 Super Fast Launcher is one of the fastest, and smoothest Google Android homescreen launchers which I use for Android. Changing your Google Android launcher is one of the simplest ways to make your smartphone, and tablet to run smoother, faster, and use less battery life. It runs quickly, and does not freeze or crash like other launchers I used. It also uses the new material design found in Google Android 5.0 Lollipop. The shortcut icons also load and show up quickly right after I turn on my tablet, or restart my tablet.

Super Fast Launcher is a nice launcher for older and cheaper Google Android 4.0-4.4+ smartphone and tablets which has 1GB or less RAM, a slower CPU, and less storage space. It is also good to use if you play a lot of games, and use a lot of big apps since this launcher does not slow down your device.

Super Fast Launcher file size is also very small at only 215 K which is smaller than 1MB. Launching All Apps Drawer is also very easy by sliding my finger from the left edge to the right launches the App Drawer which shows all the Apps with icons and names installed on my device in alphabetical order from A-Z.

Super Fast Launcher also has supports for on-screen Widgets which you can add by tapping on the three dots icon on the top right, and tapping on add widgets.

This launcher also does not have any advertisement, and App recommendation features which uses up data, and can slow down your smartphone, and tablet while also using up battery life.

It also only has 2 permissions on the App which are choose widgets and expand/collapse status bar.

You can download Super Fast Launcher for free at Google Play at https://play.google.com/store/apps/details?id=com.wsmlby.cloudlauncher