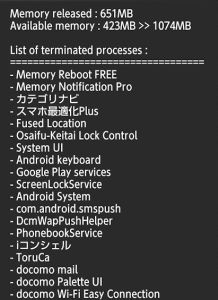 After running Fast Task Killer, my tablet runs faster, and smoother when I play games, or scroll up and down websites on a web browser.

After I install Fast Task Killer, I just need to tap on its icon to launch the app. Once Fast Task Killer is launched, it will quickly stop background tasks, and display a gray Window in a few seconds which shows you how much memory got released by killing background apps, Google Android’s available Memory/RAM for running apps, and the list of background apps which it has stopped.

Fast Task Killer also only has one permission for Google Android which is “close other apps”.

Fast Task Killer also automatically closes the gray task killer report after a few seconds. It also does not have any advertisement, or app recommendations which can use up battery life, data, and slow down your device.

You can download Fast Task Killer for free at Google Play at https://play.google.com/store/apps/details?id=jp.snowlife01.android.appkiller2