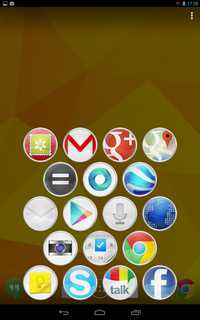 Slide Launcher is a Google Android launcher which shows app shortcuts which you added to Slide Launcher when you slide your finger up from the Home button on Google Android’s home screen. You can also make shortcuts to phone, and direct message people on your contacts in Android if you use Slide Launcher on a smartphone.  Slide Launcher runs very quickly, and does not use any CPU, or RAM when it is not running unlike other launchers which are always running in the background using system resources like RAM, and CPU which can slow down your device, and use up more battery life.  The low system resource usage of slide launcher will also mean it will use less battery power. Its download size is 1.6MB, so it uses very little storage space compared to other launchers which sometimes can use 30MB or more space .  Slide Launcher shows up in only a second or less after sliding my finger up from the home button. I can also launch Slide Launcher when I use other apps like a web browser, so I do not have to be at the Homescreen to launch Slide Launcher.

Slide Launcher is like the Windows Start menu where you can open it from your desktop, or while you are using another non-fullscreen program like a Word Processor, and web browser.

Slide Launcher is a good launcher to use if you use a very basic low system resource usage launcher like Null Launcher, or Terminal command line based launcher where they run very lightly, but can’t launch apps, or you need to type a command line to launch an app.

It is also a good launcher to use even if you use a full featured launcher like Nova, Google Launcher, Touchwiz, etc since you can use Slide Launcher to bookmark your most launched apps to save time instead of looking through or searching your homescreen and All Apps Drawer with tens to hundreds of apps, widgets, and settings icons.

Slide Launcher is also nice to use if you like to have an empty homescreen with nothing on it or only a few widgets, and app icon, but you still need to launch a lot of apps per day where Slide Launcher will show all the apps which you added to Slide Launcher after you swiped up from the Home button.

Adding App shortcuts, and settings shortcuts to Slide Launcher is pretty simple, and It is easy to customize the look of the icons.

You can arrange the apps in Slide Launcher as a circle, arc, grid, bar, and more. I like using a bar to arrange my apps since I only use a few apps, and the app icons are on the right of the screen, so it is easy to launch apps by tapping on the icons with my thumb.  There are also frames like circles and hexagon to make app icons look nicer. It is also possible to sort, and re-arrange app icons in Slide launcher to make apps easier to find. I can also re-arrange the spacing between icons to make more icons fit on the screen, or make it look nicer.

It can also be  opened with search or camera buttons for smartphones and tablets that don’t have the navigation bar on Android.

Slide Launcher works for Google Android 4.0 and above. I use it on Google Android 5.0 on my Asus Nexus 7 2012 tablet, and it works very well at launching apps.

Slide Launcher is a good launcher for quickly launching your apps with a swipe up from the home button. It is also very fast, lightweight, and does not use much storage space.