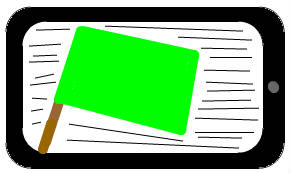 Removing App icons, and Widgets from your homescreens/desktops could make your phone or tablet faster since the widget is not updating its info.

Exiting/closing apps also free up some RAM. Typically, you just keep pressing the back button, or go to your app settings and pressing the exit button on the app like a web browser or game to close it. Using a task killer like Rechild’s Task Killer works at closing many apps at once.

You can also use the details/info page for individual apps in the App settings section of Android to Force Stop/Close individual android apps,so they are hibernated, and won’t run in the background until you open them with the launcher.

If you use a Live wallpaper, switch to a regular picture based wallpaper will free up RAM since pictures use less RAM than a video or app which is animated acting as a live wallpaper. Your battery life will be better as well from not having to display animations on the homescreens.

Some apps like Google Maps in Google Android can’t be uninstalled, but they can be disabled in some versions of Androids like Android 4.2.2 Jellybean which let you disable the app in the App settings in the default uninstaller for the App. However, Apps like Maps, YouTube, etc don’t really affect your phone or tablets performance when they are just running.

Disabling Apps like YouTube which can’t be uninstalled is pretty easy to do by just going to settings> Apps > look for YouTube, tapping on it, and clicking uninstall updates, and lastly clicking disable. You can also use an app called Hide Apps to easily disable pre-installed apps quickly, and easily.

Turning off features in Android settings like Bluetooth, Data, Location Access, NFC, account syncing, and Wi-Fi if you don’t need to go online will free up some RAM as well because they are not running anymore. Some apps like Facebook, Newsreaders, and Twitter also have automatic syncing and notifications. You can usually delay, or disable syncing and notifications, and manually sync yourself by taping on a button.

Disabling automatic updating for Google Play could make using your phone or tablet faster since you won’t be interrupted by automatic updates, and just get a notification to tell you to update your apps when you are not doing anything important.

Using a Task Killer does not really make a huge difference when it comes to performance increase, and can sometimes make your phone or tablet slower, and unreliable since they sometimes run in the background like other apps you want to stop from running. Task killers also might stop apps which you want to run.

There are also apps like Smart RAM Booster which claim to optimize Android RAM, and the user reviews seem pretty positive.

I recommend picking phones, and tablets which uses the Nexus branding by Google like the Nexus 4, 7, and 10 since they come with the most latest version of Google Android, and they don’t come with apps like custom themes which can slow down your phone or tablet compared to just using the default theme in Android.

If you are not using a Nexus Android device, using a third party launcher like Go Launcher EX, Nova Launcher,  and ADW.Launcher can make your phone feel faster, and use less RAM than the bundle launcher which came with your device.

Nexus Google Android tablets like the Asus Nexus 7 32 GB Tablet and smartphones like the Nexus 4 are also cheaper or similar price than similar devices with the same performance and features. You also be first to get new updates for Android compared to other devices where you have to wait months to years for new updates if you are lucky. A lot of times device makers don’t release Android updates for their devices, so you never get them even though your device supports newer versions of Android.

Typically, Google Nexus Smartphones and tablets are easier to root to install custom Android operating systems like Cyanogenmod with fewer bundled apps, and to remove preinstalled apps like Google Maps since there are a lot of online tutorials on how to root a Nexus phone or tablet. Once you rooted your Android device, you can also overclock them for faster performance.

Next post: Increasing the Battery Life on Google Android Tablets and Smartphones