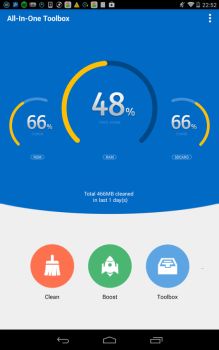 All-In-One Toolbox is a easy to use free system utility app for Google Android smartphones, tablets, and devices. It increases the free space on your device by cleaning up a lot of different types of junk files like cache files, thumbnail images, advertisement images, empty folders, residual files, temp files, and other non-important junk files. It also has a task killer memory booster which stops background apps from running to free RAM, and CPU resources, so your Google Android device runs faster with fewer app freezes, and crashes. Stopping background task can also increase your battery life because fewer apps are running in the background.

It has over 29 tools built-into its app.

It also can delete Delete SMS & Call logs, browser history, and temp files to protect your privacy while also freeing up space.

It support plug-ins to add even more features to All-In-One Toolbox. Gamebooster, Volume settings, Auto Task, Compass, and Android Sensor Box are some of the plug-ins available for this System Utility App.

When I use All-In-One Toolbox it runs pretty quickly when doing a cleanup scan, and clean up task. The cleanup task also stops background app tasks which use up RAM, and CPU resources while draining your battery. All-in-one clean up finds a lot of junk files like cache files, residual, thumbnail images, and other unneeded files which can use hundreds of MBs of space or more. The Memory Booster in All-In-One Toolbox only takes a few seconds to launch, and run to stop unneeded tasks from running in the background of Google Android. The tools like batch uninstaller very useful when I need to uninstall multiple apps at once.

I like the easy to use simple and clean user interface for All-In-One Toolbox. The animations on the app runs pretty quickly. When I tap on the RAM graph on the main dashboard of Toolbox, it does a quick RAM boost which is a nice feature. In RAM boost, I can also tell RAM Boost to Whitelist ignore Apps like Facebook Messenger, Google Hangouts, etc.

Downloading, and installing All-In-One Toolbox from Google Play is pretty fast because it is only 5.7 MB in size. It also works on Google Android 2.3 and up. I use it on Google Android 4.4.4 on my Asus Google Nexus 7 2012 16GB Tablet, and it works pretty well, and runs quickly.

There are also tools in this system utility app to learn more about your device like how much RAM it has, what type of CPU it uses, and the different features it has.

All-In-One Toolbox is an easy to use, fast, and powerful system utility app for cleaning up junk files, protecting your privacy, and making your Google Android smartphone, tablet, and device faster.

You can download it for free at Google Play at https://play.google.com/store/apps/details?id=imoblife.toolbox.full

Next post: Doorways Launcher for Google Android a fast launcher which is text based with a shortcut dock