by Johnson Yip on November 1, 2014
in Google Android 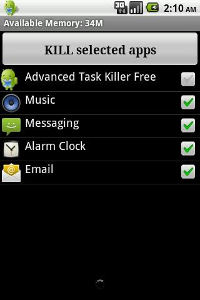 Rechild Task Killer also known as Cleanoid is one of the smallest file sized Task Killer apps for Google Android. It is only 56K in size which is smaller than the size of some text files, so you can download and install it on your device in seconds. Task Killer also loads up pretty quickly after tapping on the Task Killer shortcut icon on Google Android’s home screen.I like the simple black, and gray theme of Task killer because it is very simple, and clean to look at, and it is fast to use.

A Task Killer is an app which stops background apps like apps which you previously open like web browsers, office suites, social networking apps, and bundled system apps also called bloatware or shovelware from running in the background which can make Android load and run games and apps better because it has more free RAM, and CPU cycles after you killed apps from running. Stopping Background tasks from running could make your battery run longer before you need to charge it because background apps are no longer using up RAM, and CPU resources in Google Android once you kill them with Task Killer. Your phone’s battery, and case may also run less hot because it is using less power to keep background apps a live.

In Task Killer all Background apps are checked by default even the Task Killer App, so once I press the big Grey “Kill Selected Apps” button at the top of Task Killer’s app screen, it will kill the apps which are killable like web browsers, games, and bundled bloatware apps which are  running in the background. It only takes seconds to kill background apps with Task Killer. Task Killer can’t kill some apps like Google Keyboard, Wifi, bluetooth, NFC, and apps built-into Google Android. You would need to root your device to uninstall and kill system apps, and bloatware from running. You can select or unselect background apps by tapping on the check boxes on the right of the running apps items to create an ignore list before you tap the “Kill Selected Apps” to kill background apps. I recommend not selecting apps like Google Hangouts, Facebook Messaging, Dialer, etc to prevent not being able to receive new messages while you use your phone or tablet.

Task Killer by Rechild is a fast, simple, and light task killer app for quickly stopping background apps from running in Google Android. It also works on older versions of Android like Froyo, and Android 1.5. I tested it in Google Android 4.4 Kitkat, and it works very fast, and reliably in 4.4. It is also ad-free, so there are no ads.

You can download Rechild Task Killer for Google Android at https://play.google.com/store/apps/details?id=com.rechild.cleaner