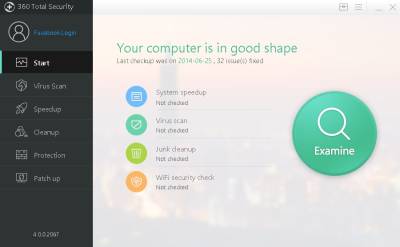 360 Total Security is a free antivirus software for Windows which is fast, and also speeds up your computer by performing tweaks, and disk cleanup to Windows.

The program looks pretty nice with its modern flat design, and is pretty easy to use with its colorful buttons, and simple descriptions.

The Start section for Total Security is easy to use it scans my computer for system speedup problems, virus problems, and junk files with one click of the examine button. You could fix the problems you are having on your computer by clicking the Repair button after the scan has finished.

The Virus Scan in 360 Total Security is pretty fast for a quick scan. It takes only a few minutes to complete. The Full Scan and custom scan could take hours depending on how many files are on your computer’s hard drives. The scan engines which Total Security uses are 360 Cloud/Online scan engine, System Repair Engine, QVMII AI Virus Engine, Bitdefender Engine, and Avira Antivir virus engine, so Total Security is more likely to catch more viruses because it uses more virus engines to look for them.

Total Security also protect Internet Explorer from the IE Vulnerability “Snowman” (CVE-2014-0322) according to its website.

There is a Speedup section which scans your computer for slow start up items, scheduled tasks, Application software services, system critical services, and Network performance optimizations, and fixes them to make your PC faster.

Total Security also cleans up your junk files from Windows, Caches, your web browsers, apps, programs, and plug-ins which can take up hundreds to thousands MBs of space which make doing tasks like virus scans, disk scans, and disk defrags slower because of the number of files, and size of files on your hard drive. I usually get back a few hundred MB, or 1 GB of free space back which I can use to store other files like video files.

If your computer is slower, or you want more protection, you can setup Total Security 360 to performance mode instead of balance or security mode. You can also create a custom mode which is best for you by turning on and off settings like Download file scan, malicious website blocking, online shopping protection, scan file when open, and saved, network threat blocking, Avira scan engine, and Bitdefender scan engine.

There is also a sandbox program for opening programs in a Sandbox by right clicking the desktop shortcut or program with your mouse, and picking “Run in Sandbox” to run the program in Total Security Sandbox to protect your computer from viruses in the program, or websites if you use the Sandbox to run web browsers. You could also use Sandbox to run software, and open files which you may not trust.

You can learn more about 360 Total Security, and download the 25MB installer file for Windows XP, Vista, 7, 9-8.1 from http://360safe.com/totalsecurity.html