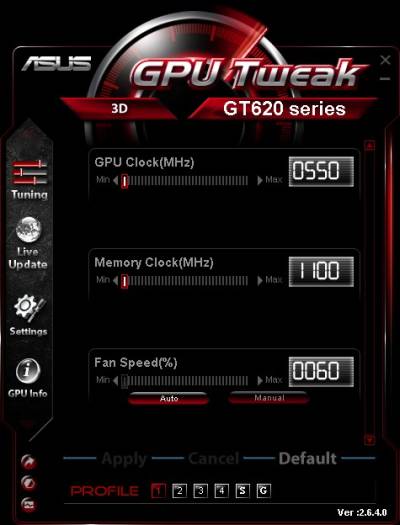 Asus GPU Tweak is an easy to use Asus video card over clocking utility program for Windows operating systems. It usually comes bundle with the drivers for Asus video cards when you buy an Asus Video card for Windows, but you can download it from Asus website, too.

Overclocking make your video frame rates faster, so video runs smoother with less or no slow down problems. After overclocking,  you can set the video quality in games to the maximum quality setting and resolution, or. from low to medium, or medium to high in some games.

I have been using Asus GPU Tweak 2.6.4.0 on my Windows 8.1 desktop computer with a dual-core Intel 1.86 GHz CPU, and 1GB of RAM to  overclock my Asus Nvidia GT 620 1GB video card when I play 3D games like Gameloft Asphalt 8: Airborne which I downloaded from  the Windows 8 App store for free .  Overclocking a video card makes playing my games more enjoyable because the video in games run more smoother, and don’t stutter, and freeze as much during intense 3D gameplay. Overclocking a video card make it possible to play my games with a slower and older video card like my Nvidia GT620 1GB card. Overclocking my  video card also increase my web browsers performance, and other video card GPU accelerated programs which use the Video Processor on my video card to speed up a computer program graphics and processing like the Google Chrome, Internet Explorer 11, Firefox, and Opera web browser which now has GPU acceleration.

In my experience, using Asus GPU Tweak 2.6.4.0 to overclock my Asus Nvidia GT 620 1GB card has been pretty easy to use to overclock my videocard, and overclocks has been stable in Windows 8.1. It only takes a few seconds to overclock a video card on GPU Tweak if you know what speed you want to set the video card to, or you use one of the convenient overclocking modes like G/Gaming, or P/Power Saver presets which come bundled with GPU Tweak’s overclocking profiles.

I like the red and black modern theme. It is very easy to use since there are presets for gaming, and power saving overclocking in GPU Tweak. Overclocking a video card just involves moving the slider button for the GPU, and Memory to the right and left, and hitting apply on the bottom. I can also save my settings in 1 of the 4 profile settings.

There are preset settings which make overclocking a video card for gaming easier. For example, there is a G Gaming Mode which overclocks my GPU core to 720 MHz from the regular 700MHz , and the memory clock to 1340MHz from the regular 1300 MHz. The frame rates, and video quality in games are better when the video card is overclock to a higher mode. I notice that Asus GPU Tweaks preset Gaming profile is pretty stable, and does not cause my PC to crash.

There is also a power saving mode which underclocks the GPU core to 650 MHz to save power, and make your video card run cooler when you use your PC for less video intensive tasks like typing, and web browsing. If you want to save even more power, you can manually underclock your GPU and video memory to the lowest settings by moving the slider all the way to the left which decreases the Mhz number to a smaller number, and lastly click the Apply button with your mouse. The lowest I can set my Nvidia GT620 core clock to is 550MHz, and GPU memory to 1100MHz. Sometimes, if your video card is faster, you can still watch HD video files on your computer when you underclock your video card’s GPU Clock Core, and Memory clock to the lowest speed in GPU Tweak.

For more advance users, it is possible to over clock your video card’s GPU core and memory by sliding the slider buttons to the right and left with your mouse, and hitting apply. You can also save the settings to one of the 4 profile buttons at the bottom by clicking the save button, and pressing 1, 2,3, or 4 when they appear under the save button.

In my experience, overclocking is generally pretty safe if you don’t overclock your videocard’s GPU clock speeds too high, and don’t set the memory clock to high. I don’t recommend you change your voltage settings unless you know what you are doing, and have a quality power supply, and your case’s cooling is good.

If you are worried about your video card over heating, you can manually set your fan to 100% speed. There are also video card fans like Vantec Spectrum System Fan Card which you can install onto your desktop computer’s PCI slot  to cool your video card even better for  more higher, and stable overclocks to your videocards GPU, and memory.

In the Advance Mode in GPU Tweak you can disable the 2D clock, and also change the 2D clock speed. You can also adjust the (Frame Per Second/FPS)  Frame Rate Trigger, and Display Refresh Rate settings.  If your video card is very slow, disabling the 2D core may make 3D games run faster. I usually set the Frame Per Second Trigger to 30 FPS which is pretty smooth in my experience. I recommend changing the Display Refresh Rate to your monitor’s default refresh rate.

GPU Tweak also comes with GPU-Z which tells you about your video card’s brand, model, and specs. There is also a monitoring program in GPU Tweak to monitor the temperature, usage, memory usage for your video card, CPU, and computer.

In the settings, you can make GPU tweak start up or not start up after Windows start up. Turn off the skin, and use the default windows skin. You can also change the tune settings, liveupdate, and keyboard shortcut settings in GPU Tweak.

There is also a Liveupdate feature for updating your videocard bios, and drivers.

Asus GPU Tweak is an easy to use video card overclocking, and video optimization program for Windows, and Asus Video card.

You can download Asus GPU Tweak for Windows, and Asus video cards at http://support.asus.com/Download.aspx?SLanguage=en&m=ASUS+GPU+Tweak+for+Graphics+cards