by Johnson Yip on May 23, 2016
in Computer Parts, System Utility Programs, Windows 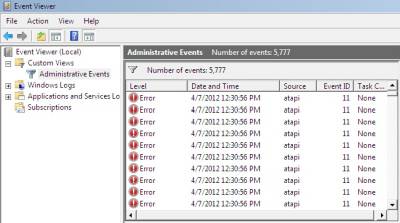 ATAPI 11 problems also seem more common in SATA desktop hard drives which I owned, and less common on IDE Ribbon cable hard drives. ATAPI 11 errors has not showed up on Windows on my laptop, and it seems to be more common with Desktop computers when I read forums and blogs about fixing the ATAPI 11 problem in Event Viewer. I think laptops are designed, so that the drive controllers on the motherboard, drive, cables are less likely to become loose because of vibrations when you carry them around in a bag, or car. A laptop also vibrate less because the drives are slower, and the fans spin slower, so it is less likely the vibrations from a fan or hard drive can shake the connection loose. ATAPI 11 problems may also be less common on tablets, and laptops where the flash storage chips are soldered on the motherboard which is becoming more popular with cheaper laptops with 16-64GB of flash storage. There are some mSATA storage drives which are inserted tightly into a slot sort of like how RAM or a PCI card is installed onto a PC, and the storage drive screwed in which may make them a lot less likely to come loose and have a bad connection because of how mSATA drives are installed in a tight way, so these types of drives maybe less likely to experience ATAPI 11 errors because of a loose connection.

I think the IDE Ribbon cables are connected more securely to the drive controllers, so they are less likely to have a poor connection because of a loose cable. But, SATA cables are not as tightly secured, and can come loose sometimes which may cause the ATAPI 11 error.

Luckily, I have been able to fix the ATAPI 11 problem by using my electronic duster or canned air to blow out dust which maybe trapped inside the hard drive cable’s metal connectors, and the metal connectors on my hard drive controllers on my motherboard and hard drive. I think the dust caused my connectors on my hard drive and controller to have a poor connection causing ATAPI 11 errors. The dust inside the connector may also make the plastic parts more slippery and move around more because the plastic on the cable and the plastic on the motherboard SATA connector are not directly touching each other when there is some dust between the SATA cable’s plug, and the SATA drive controller plastic port.

If your computer uses air cooling from fans, the vibrations from a broken vibrating fan maybe shaking the hard drive and motherboard connections. The fan vibrations will make the connection less reliable if the vibration makes the connection loose from the shaking of the vibration. Once a fan which was vibrating a lot caused ATAPI 11 errors until I replace the fan with a non-broken vibrating fan, and re-seated the data cable for the hard drive.It is also a good idea to check if your hard drive, Disc drive, and other drives and parts on your computer are all securely attach to your desktop computer’s case, so that there are not any strong vibrations which may shake your cables loose. There is also a possibility of someone or something bumping into your computer causing the drive cables to come loose from the sudden vibrations from something bumping into it. You may alo accidentally loosen the SATA drive cable of your computer while you opened your computer case to clean inside, fix, replace, or upgrade a part inside your PC case.

In rare cases, ATAPI 11 errors maybe caused by a device driver software, software problem from Windows, and hardware compatibility problems with Windows. You may need to install the latest version of your motherboard’s hard drive controller driver, and other drivers. Running Windows Update to install the latest version of drivers released for your computer, using a Driver updating software like Driver Booster by Iobit may fix your problem more easily by scanning for, and installing driver updates. DUMo is also a good free driver update monitor program for finding out which drivers have a new version. But, you need to use a web browser to manually download and install the driver updates. A BIOS/Firmware update for your motherboard may fix your hard drive problems, but BIOS and Firmware updates can be very risky if you install the wrong BIOS/Firmware, a software or hardware problem during the firmware install, or if there is a power outage during the firmware update which can break your PC’s motherboard.

There are Hard drive checking tools like the Windows Disk Scanner program found in Windows Explorer, Chkdsk for the Windows Command line, HDDScan, SpinRite, and the hard drive manufacture’s drive checker tool which you can use to scan your hard drive for drive errors.

If it is a new hard drive you installed on your PC which is having ATAPI 11 errors, the hard drive maybe not compatible with your version of Windows, your hard drive controller, or it may be broken/damaged, and you need to get a replacement.

In my experience, Fixing the ATAPI 11 hard drive error in Windows Event Viewer can be simple to fix in most cases when I fixed it by unplugging the drive cables and re-installing them back on my hard drive’s SATA port and SATA connector on my desktop computer’s motherboard. But, fixing ATAPI 11 require some time to troubleshoot what is wrong with my hard drive, hard drive driver software, or hard drive controller and cables because there are no pop-up messages or full screen error messages to tell me what is wrong.