by Johnson Yip on May 22, 2016
in System Utility Programs, Windows 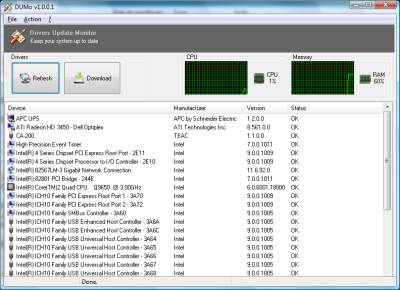 DUMo by KC Software is a free program which scans for software updates for your Hardware Driver Software like Video card drivers from Nvidia or AMD, and informs you if there is an update available. It also tells you which Hardware Driver software version you are using in Windows.

Hardware Driver Software is needed in Windows for hardware like soundcards, videocards, keyboards, mouse, and webcams to work. Installing the latest version of a driver software can fix performance, security and reliability problems in older versions of Drivers installed on your computer. Sometimes new videocard drivers can make newer PC games run better because the newer drivers have new features which make games run faster.

DUMo just informs you which drivers need updates for your version of Windows, but does not automatically install drivers, so you have to manually download and install the driver by using Windows Update, downloading the newest driver from the hardware makers website, or from a download site like download.com. You can also use DUMo to help you find the driver software online by using your mouse to click on the driver which needs to be updated, and clicking the Download button in DUMo. Once you click the download button, a web browser like Firefox will open, and you could use KC Software website, and Google Search to find the website where the driver software could be downloaded.

DUMo is very easy to use, and its hardware driver software scan is very fast. I like the basic gray design of DUMo which has a Refresh, Download, and Menu buttons. SUMo also tells me the names of my devices, driver versions of devices, and what the latest version is, and the Update Status of my device. There is also a useful system resource monitor which shows me how much RAM, and CPU resources I am using. DUMo installer file is only a few MB in size to download from its Download website.

DUMo also claims it has more compatibility and less false positive than others Drivers Monitors according to user feedback. It also has Internationalization support.

Note: I recommend being careful to not install the wrong version of videocard, keyboard, and mouse drivers since there is a risk of your video, keyboard, and mouse not working on Windows which make fixing Windows harder. It is best to use the internet to see if other users are experiencing problems with the driver software before you install it.

If you are experiencing problems after a driver update, you may need to boot into safemode in Windows to uninstall the driver, use your Windows install disc to fix Windows, or run a system restore to fix a bad installation of a driver software. The Device manager in Windows also lets you roll back to an older version of the driver, so your device works again.

I usually don’t update my mouse, and keyboard drivers unless I am having problems because I don’t want to risk not being able to type, or use my mouse which makes fixing, and using Windows harder or impossible.

I think video cards benefit most from driver updates because newer versions of video card drivers may run newer games faster because of new features.