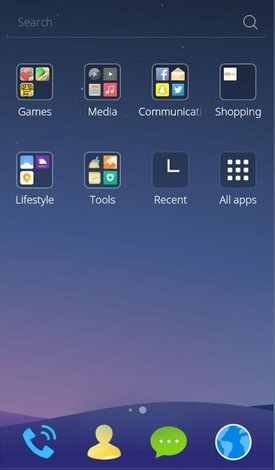 CM has a RAM Boost Homescreen Widget which shows you the amount of Free RAM on your device, and let you Boost your RAM to free up more RAM for faster performance. All you need to do is tap on the Boost Widget or Boost in the status bar app for CM.

CM is easy to install from Google Play, and it is easy to use as a launcher. I like that CM Launcher has a recent Apps widget, and the All Apps Widget which display apps in Alphabetical order. Apps on the homescreen are organized by categories like media, photo, video, etc makes finding apps easy to find to launch with CM Launcher.

CM Launcher has an antivirus engine built-in which protects your smartphone, information, app data, apps, and games from viruses, malware, and spyware.

It is also possible to uninstall Apps from within the CM Launcher homescreen by dragging the app shortcut to the uninstall text which appears on the homescreen.

It is also very easy to change the wallpaper, add and remove widgets, and change the theme in CM Launcher to make it look the way I want it to look. All I need to do is hold down my finger on an empty space on CM Launcher, and a white menu would appear at the bottom of the homescreen where there are options to change Wallpaper, add Homescreen widgets, change system and CM settings, send Feedback, and Rate CM Launcher.

It is also possible to remove the search, clock, RAM Boost, and other widgets on the homescreen to save space. CM Launcher automatically remove empty homescreens, and add more homescreens when you need more space for app shortcuts, and widgets.

In the Status Bar, CM adds a convenient toolbar remote app for quickly viewing all your Apps, and Games, turning on your flashlight, controlling your Data and Wifi, Boosting your RAM on your smartphone.

When I tap on the More Icon on the CM Status bar,  I can control Airplane mode, data, wifi, ringtones, vibrate, hotspot, rotate, Bluetooth, GPS, Brightness, Flash Light, System Settings, and CM Settings from the More Menu for the CM Status Bar.

CM Launcher is a good homescreen launcher which is fast, lightweight, simple, and secure to use on a Google Android smartphone.