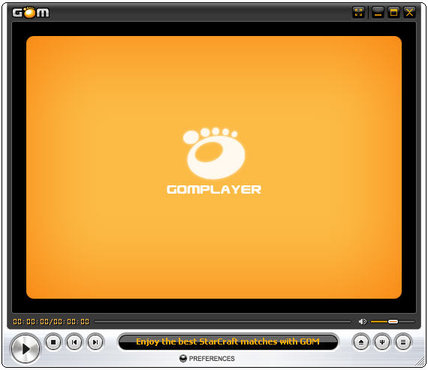 Gom Player is one of my favorite free video and music players for Windows. I have been using GOM Player as my main video player on Windows for many years. GOM is fast, easy to use, stable, and can open most types of video, audio and music media files likeAVI, MP4, MKV, FLV, WMV, MOV, MP3, and more!.  It can even watch DVD movie discs. It also has a codec finder to download and install codecs for less common video and audio files. It’s user interface also looks very nice for a media player. It is also possible to change the theme and logo of the media player to give GOM media player a different appearance instead of using the default theme. GOM Media player has a full screen mode to watch videos in Full Screen, and use GOM Player more easily on a large TV and monitor.

When I use GOM Player on my older Windows 8.1 computer with a 1.86 GHz Intel Core2Dou Dual-core CPU, 3GB RAM, 320GB hard drive and Nvidia GT 620 1GB video card, GOM player opens very quickly after double clicking the GOM Player Shortcut on my desktop. It also opens HD video files in a few seconds, and the video does not freeze, or stutter when playing big video files. The video quality of GOM player is clear when I use GOM to play video. GOM also automatically deinterlaces video for video files which needs to be deinterlaced because the video was recorded from an interlaced video source like analog TV which displays horizontal lines when played back on a computer.

It is also easy to rotate videos 90 degrees by pressing [Ctrl] + [Shift] + [S] at the same time on my keyboard, or by right clicking the video button on the right-click menu and clicking the rotate button.

Audio and music files also sound pretty good in GOM when I use GOM to listen to music on my PC.

GOM has a lot of advanced features like A-B repeat, keyboard shortcuts, screen capture, audio capture from video files, playback speed control, and video effect which is great for power users, and users who need a more feature rich media player which can do more task without the need to install extra plug-ins/extensions, and programs onto their computer.

GOM Player is one of the best free media player software for playing back video, music, and audio files in Windows because GOM is fast, reliable, simple to use, feature-rich, and has a lot of customization like settings, skins, and logos to make GOM Player look and perform the way you want it to perform on your Windows-based desktop or laptop computer.