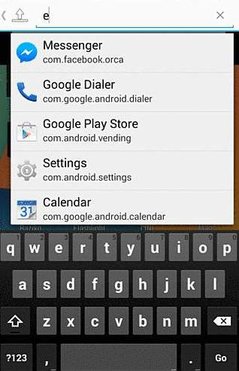 I can use voice search to search for Apps to launch with Text Launcher on tablets, or smartphone has a microphone, and have a voice recognition app like Google Voice installed on Google Android, or the voice recognition feature comes bundled with the keyboard app.

Text Launcher launches in a few seconds after tapping on its shortcut icon on the homescreen. It runs pretty quickly on my Asus Nexus 7 2012 Google Android 5.1 Lollipop Wi-Fi tablet with a Nvidia Tegra 3 Quad-Core 1.3 GHz CPU, 1GB of RAM, and 16GB of storage. Text Launcher rarely freezes, or crashes in my experience when I use it in Google Android to launch apps with text searches for the app I want to launch.

Text Launcher uses no RAM, and CPU resources when not being used unlike App search widgets. Text Launcher also only searches for Apps, and does not search for contacts, websites, apps, and other things like other search apps for Android.

It also does not run at an Active Process when I check the Running section of Google Android’s App Manager found in the settings for Google Android.

The user interface for Text Launcher is very simple. It displays a small 1 line text box on top of your regular launcher or another app if you launch it from its Notification’s shortcut icon. You type in the text box to search for apps by typing the name of the app, and pressing Enter/Return to show the full list of results. To launch an App, you click on the App shortcut  which you wan to launch from the list of results.

Text Launcher installer download size is only 2.3 MB in size, and it can be installed on devices running Google Android 4.0 and up.

Text Launcher is a great search App which is one of the fastest ways to search for only installed apps on my Google Android device by typing keywords into a textbox, or using voice recognition.