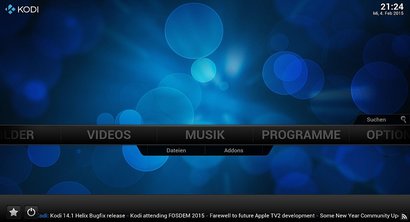 Kodi.TV which was called XBMC is one of the best free Home Theater media player Software which works for many different operating systems like Windows, Linux, Mac, iOS, Google Android, Raspberry Pi, and other computer platforms and operating systems. Using Kodi is a cheaper alternative than buying a settop box or DVR with custom software, and hardware because Kodi is free, and can run on a lot of cheaper devices like the $35 Raspberry Pi, and slower Linux and Windows based computers with operating systems like Ubuntu and Lubuntu which can still run smoothly on older computers with a single to dual-core CPU,  older video card, and 1GB of RAM compared to other operating systems which need a faster computer with 4GB of RAM, a faster video card, and a faster CPU to run smoothly. Kodi can probably even run well on older Windows 7 computers from 2012 and cheaper Windows 8.1 with Bing, and Windows 8.1 computers like those $99-199 Windows computers and tablets with Intel Celeron and Atom based dual-quad core, 1-2GB RAM, onboard Intel HD graphics, and 16-32GB flash storage.

Installing Kodi on computers, and mobile devices like tablets and smartphones is simple. You just need to run the Kodi installer file, which you download from Kodi’s website, to install it on your PC or mobile device which runs Windows, Linux, Mac, iOS, and Google Android.

Opening, and running Kodi is simple as well since you just need to click on the Kodi desktop shortcut icon to open Kodi. Most commands in Kodi can be done on a mouse, and keyboard, and does not require any special training to learn how to use. In my experience, it took me less than an hour to learn how to use Kodi, and change settings related to sound, video, add-ons, media playback, and changing the clock.

If you use Windows, Google Android, Linux, and slower devices, I recommend you close your other programs like games, web browsers, and office suites before you open Kodi since other programs running in the background can use up a lot of RAM, and CPU cycles which can make Kodi, and your PC run slower. Disabling the RSS feed in the user interface settings for Kodi could also make Kodi slightly faster by not having Kodi download new RSS feeds to the bottom of Kodi’s dashboard. There are also custom skins for Kodi which are more lightweight and simple to make Kodi run faster.

Kodi runs well at playing back most kinds of video, music, and picture files like mkv, divx, avi, wmv, mov, mp3, mp4, wma, ogg, flac, wav, jpeg, gif, png, and bmp on my PC, the internet, and home network when I tested Kodi on different operating systems, and devices.  I haven’t found a media file on my PC which Kodi can’t open yet.

Kodi also supports album, and movie art for supported videos, and music files with artwork. Kodi.TV plays media very smoothly, and rarely slowdowns or stutter even when I use it to playback HD video from the internet, a USB flash drive or hard drive, and files on my hard drive on my PC.

The default user interface for Kodi is easy to use as well because the sections are split out into Music, Video, Pictures, Programs, Settings and more. You can also install custom user interfaces to make Kodi easier and faster to use on older computers, tablets, laptops, and lower resolution monitors.

It is pretty easy to install add-ons for YouTube, Dailymotion, Metacafe, and other free streaming video and audio add-ons to Kodi in my experience because I just need to use my mouse to pick which add-ons I want to install in Kodi. Some third-party add-ons require you to use a special zip file to install third-party Kodi add-on in the System add-on settings. Kodi is one of the best software for finding, and watching online video in full screen mode on a TV connected to a PC with Kodi installed on it because you can install a lot of add-ons to make it simple for you to find online content from websites.

Kodi also allows you to watch and record TV on Kodi media center  if you have a TV tuner card installed on your PC. It supports TV backend software like MediaPortal, MythTV, NextPVR, Tvheadend and many more.

Kodi also has support for hundreds of remote controllers, and input devices like gamepad controllers, keyboards, touchpads, and mouse. Kodi supports smartphones and tablet apps to control Kodi media player with a remote control app for a smartphone/tablet. You can also Interact with Kodi using its JSON-RPC based remote interface, so you can use web browsers, 3rd party tools, and remotes to use Kodi.

Kodi is a nice free home theater media player hub software which is a good alternative to a settop box which can just play video, and music, and cost a lot of money sometimes if the device is a DVR which have a lot of features like a hard drive, TV tuner, and custom software for recording TV shows. But, Kodi is free, and you just need to install it on your computer which runs Windows, Linux, Mac, and other operating systems. You can also continue to use your computer as a computer to browse the web, do office work, play games, and use other media player software even after Kodi is installed on it because Kodi is a regular program/app instead of an operating system with a limited app store like some settop boxes which just can play video, and listen to music on a TV.

Next post: VLC Media Player can play most video audio files on a desktop computer