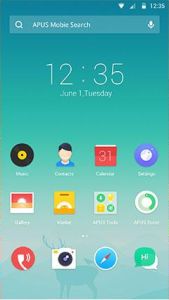 APUS Launcher is a nice alternative launcher for Google Android smartphones and tablets. APUS Launcher is fast, small, and lightweight, but still very customizable with custom themes, icons, and wallpaper.

I use APUS Launcher on my Asus Google Nexus 7 2012 16GB Wi-Fi tablet with a Tegra 3 CPU clocked at 1.3 GHz, and 1GB of RAM, and APUS runs pretty quickly, and reliably. APUS does not freeze, or crash when I used it on my older tablet. It does not slow down my startup times for my tablet, or use a lot of RAM in the background making my other apps run slower. Scrolling through All Apps, and to different homescreens is fast. APUS does not slow down even when I add Widgets to the homescreen. You can remove all widgets like search, and clock from the homescreen if you do not like widgets, or own a slower device where widgets slowdown your device when you use them on your homescreen.

The download file size of APUS Launcher is less than 3MB in size, so it uses very little space, and the small file size means it won’t use up much bandwidth to download from Google Play.

There is also an App boost features which free up my tablet’s RAM to make it run faster, and use less battery power. APUS also optimizes my RAM when I turn off my screen. When I turn back on my screen by pressing the power button on my device, I get a notification telling me how much RAM APUS has recovered. APUS RAM Booster usually recovers 100-300MB of RAM in my experience. I also downloaded and install APUS Booster+ which boost my RAM even more by stopping more un-needed background apps, and services, and preventing them from starting again.

APUS comes with a battery saver app called Power+ which lets you easily stop background tasks, monitor battery levels, and let you easily adjust settings for maximum battery life. Power+ also hows you which apps use the most power. I installed APUS locker which let me lock my screen, and turn it off by double tapping on its screen. The Double tap gesture can be set to view current wallpaper or select new wallpaper. There are other touch gestures like swiping down brings down the notifications menu in Android, and Swiping up brings up the APUS search app. You can also turn them off if you do not like touch gestures.

I like that I can also easily download new themes, and wallpaper for APUS to customize the look of Android’s homescreen. It is also easy to adjust the animation quality of APUS to make it look better,  balanced animations or work faster by disabling animations in the advance settings’ performance tuning section. I can also turn off App Radar, and display “more apps” function which may make APUS launcher faster, and not show suggested apps. I can change the homescreen transition animation effect to Classic/Horizontal scroll, cube, tumbling, page, crossfade, and Rotation. I think Classic is the fastest and simplest transition effect. If you are having trouble with APUS, or it is not running fast, you can exit APUS in its settings by tapping on the Exit APUS button in the settings under the More heading. You can set APUS, or another Launcher as your default launcher  by clicking the Launcher you want, and click Always. If you still want to use APUS, click Always.

APUS is also smart enough to categorize all the apps installed in Android by categories like Games, Tools, Lifestyle and more, so I am not always searching my All Apps section, or my homescreen for the app I want to use. It also automatically categorizes new apps. I can also make my own folders on the homescreen and homescreen dock by moving one app icon from a folder to the desktop, and dragging one app on top of another app on the desktop or desktop dock to make a folder. Folders are also renamable in APUS. In the All Apps section of APUS Launcher, Apps are organized in Alphabetical order as a vertical list to make apps easier to find. APUS automatically create extra homescreens when you need more space for apps or widgets, and delete empty homescreens when there are no widgets, or icons on the 2nd homescreen.

There are four dock spaces which let you put 4 icon shortcuts, or folders onto APUS dock, so you can launch apps like All Apps, Phone Dialer, Contacts, Web browser from the dock at the bottom of APUS no matter which homescreen you are at.

The APUS Search Engine which comes with APUS is useful for finding apps which are installed on my device, contacts, or searching the internet from my homescreen. There is App Radar, Selection, and I’m Lucky, and an App Market to help me find new and apps, games, and themes to download and install from Google Play, and use on your Google Android mobile device. There is also an APUS Notifications app which notify you of messages from WhatsApp, SMS, and other notifications from other apps.

APUS Launcher is a small, light, feature-rich, and customizable launcher for Google Android which runs quickly even on older and slower smartphones and tablets.