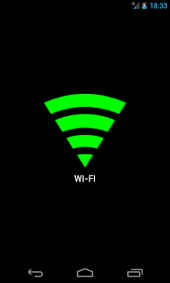 Turning ON and OFF Wi-Fi on Google Android can be difficult on some Google Android tablets, and smartphones. Using widgets to turn on/off wifi may slow down your phone or tablet when you are using your homescreen.

I found a simple to use App called Wi-Fi ON OFF which makes turning ON and OFF Wi-Fi fast and easy. The App is also very reliable, and rarely crashes or freezes when I use it. Launching WiFi ON OFF is pretty fast after tapping on the WiFi ON OFF shortcut on the Android homescreen. I only need to tap on the Wi-Fi icon on the App to turn it on, and off. There is also a small message which shows up telling you that it is turning your Wi-Fi ON or OFF.

When the Wi-Fi sign is green, it means Wi-Fi is ON. When the Sign is White, it means your Wi-Fi is Off.

Wi-Fi ON OFF makes restarting Wi-Fi simple by turning off Wi-Fi, and turning it ON again with this app. Restarting Wi-Fi can sometimes fix internet connection problems like slow performance, poor signal strength, short range, and dropped signals which prevent you from going online.Turning OFF Wi-Fi when you are not using Wi-Fi like when you are making a phone call, texting, reading a eBook, or when your screen is off would also increase your battery life/save power because Wi-Fi is not using battery power to keep Wi-Fi ON, look for other Wi-Fi networks, and send and receive data from social networking apps, and updates for apps or Android. Not having Wi-Fi ON could also protect your Privacy because you are not connected to the internet, so there is no chance apps, and Wi-Fi networks can access your data, location, and other info about your device with Wi-Fi.

I also find using this app is slightly faster than going into Android’s settings, and finding WIFI settings because this app loads fast, and there are fewer settings to look through to find Wi-Fi settings to turn it ON and OFF. Opening and using Wi-Fi ON OFF is also faster than pulling down the right of the notifications bar, and looking for Wi-Fi to launch Wi-Fi Settings which take a few seconds to load sometimes.

This App is also only 584KB in size, so it uses very little space on Google Android’s storage drive on your smartphone or tablet.

Next post: Turn Off Screen App for Google Android locks your smartphone/tablet turns off screen with one tap on Lock shortcut