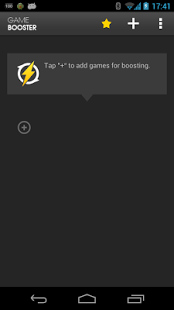 Game Booster is a launcher program which frees up RAM and CPU resources by stopping un-needed background programs like web browsers when I use it to launch games. I notice that launching games like Asphalt 8, Temple Run 2, and Regular Apps like web browsers open and load faster when I use Game Booster to launch them on my Google Nexus 7 2012. Games also seem to slow down less, and run smoother.  Game Booster also automatically closes after launching your game, or App to free up more RAM by not running in the background while you are gaming, or using your app.

Game Booster could help make games run faster on Google Android  smartphones and tablets like the Nexus 7 2012 with 1GB or less RAM.Adding games and apps, and launching them in Game Booster is very simple to do in Game Booster simple user interface. User I just click the + sign to add games to the launcher, select the games, and apps I want to add, and click save. To launch games and apps, I click on the Game or App shortcut on Game Booster, and Game Booster Boost my game and app performance by stopping background apps to free up RAM, and CPU cycles.

I like that Game Booster is only 1.1 MB in size, so it does not take a long time to download, and install. Plus, it won’t use much data to download.

Game Booster takes a second or more to open after tapping on the Game Booster icon on my tablets home screen, and boosting games, and apps are fast.

I also like that Game Booster allows me to only add  my most used and favorite games, and apps on the Game Booster launcher, so I can easily find games and apps in Game Booster instead of using All Apps on my Launcher which is full of apps like Calculator, Maps, Video players, etc which I rarely use, but make finding apps harder because there are so many apps in All Apps.

Game Booster could improve your battery by killing unwanted background apps from running, so only your game or app is running when you boosted it with Game Booster.

I also use Game Booster to load mobile web browsers, and my other most used apps, and notice they load faster, and crash less when I launch them with Game Booster because my apps have more free RAM and CPU cycles to run my Apps like web browsers.