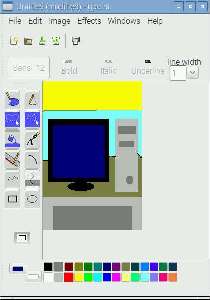 GNU Paint/GPaint is an easy to use, fast, and lightweight Paint program for Linux based operating systems. But, it still have enough features where you can use it as your main Paint Program for drawing and painting simpler images in Linux. I personally use GNU Paint on my Raspberry Pi 2 which is running Raspbian Jessie Linux. Raspbian did not come pre-installed with a Paint program like Windows, and other operating system. But, I needed a paint program to make simple pictures for my blog articles. I found using HTML5 and JavaScript and Flash paint based programs on websites too slow to use on the Raspberry Pi because of the slower hardware. Other Paint programs ran slower, used too much storage space, produce poorer quality drawings with blurry lines, and shapes, and did not have the features I wanted. But, GNU Paint has been very fast, has enough features I need like support for drawing different shapes, and lines, and it does not use a lot of storage space on my 8GB MicroSD card which I have installed on my Raspberry Pi 2.

The default picture file format for Gpaint is PNG which is compatible with other Paint and Photo editing programs like MS Paint, GIMP, Photoshop, etc.

I installed GNU Paint in only a few seconds by typing sudo apt-get install gpaint into the Raspbian command line terminal program, and pressing enter. The downloaded installation file for the installer for Gpaint is under 1MB in size, so it downloaded, and installed quickly in Raspbian installed on my Raspberry Pi 2.

Gpaint runs very quickly on my Raspberry Pi 2 when I use it to draw pictures and make simple edits to picture files, so it is a good paint program for slower computers like the Raspberry Pi 2 with a 950MHz CPU, 1GB of RAM, and less storage space. According to the Task Manager program in Raspbian desktop, Gpaint uses about 19 MB of RAM, and 1% CPU power when it is running. I can even use Gpaint on my Pi 2 when I have big programs like a web browser, and Word Processor open at the same time. Gpaint is also very reliable, and does not crash, and freeze when I use it to draw pictures on Gpaint.

Gpaint starts up in about a second after I click on Gpaint desktop shortcut in the Graphics menu on the Menu launcher on the bottom right of the desktop for Raspbian. Gpaint program runs pretty quickly, and reliably after using it for a few days to edit picture files, and create and draw on picture files on GNU Paint. The mouse cursor for Gpaint is very good at following the motion of my hand when I move my PC mouse with my hand while holding down the left button on my mouse to paint.

GNU Paint has most of the features which are found on other drawing and paint programs. The user interface is similar to the Paint programs which are available for Windows. Gpaint window is resizeable, and you can change the size of the drawing area by making a new file which launches a new file wizard. The new file wizard ask you what size you want the height, and width of your picture file to be in pixels.

The user interface for Gpaint is very easy to learn how to use because it is very similar to other computer paint program. Every Feature is on one Gpaint window. The menubar is on the top, the tools like line drawing, text, paint brush are on the left, the drawing canvas area is on the right, and the color picker buttons on on the bottom. There is also a toolbar on the top for changing the line width, font style for text, and to easily make a new file, save, and save as a picture file.Gpaint also has keyboard shortcut keys like CTRL-S to save files, so you can more quickly make and edit your picture files in Gpaint to save time.

The Gpaint window also uses the default window theme from your Linux desktop environment. Gpaint’s window is also resizeable, so users can work on two drawings at the same time on one monitor, or have another picture file open to use as a model for drawing on Gpaint by looking at the picture while you draw.

GNU Paint lets me draw straight lines, freehand lines, curve lines, circles, squares, and rectangles. I can add custom text with different font styles, font colors, bold, italics, underline the text, and change the font sizes to text I added to the pictures. I can also fill in shapes with colors. There is also a button to make squares, polygons, ovals, and circles fill automatically by clicking on the fill button. It is easy to change the line width with the drop down menu. Gpaint also comes with most of the standard colors like Red, Blue, Green, Yellow, Gray, Purple, and more which are built-into the color picker tool which has 28 colors which you can pick from to use to draw, and paint with. I can use custom-made colors by double clicking on the color button on the bottom left corner, and past the HEX color code, adjust the red, blue, and green and Hue, saturation and value levels, or use the color wheel tool built-into Gpaint. It has an edit menu with cut, copy, paste, clear and select all commands.

There is an eraser tool for erasing mistakes I made while drawing. When making a new picture, I can manually set the height and width in pixels of the picture file.

GNU Paint can be used to open picture files like jpeg, png, and gif, so users can draw on pictures, and edit them in GPaint. Gpaint saves picture files as PNG files by default. PNG is the best file format for saving pictures with many colors in my experience. A lot of programs like Gimp, MS Paint, Photoshop, etc can also open and edit PNG files. PNG files are also good for using on the internet because of their smaller file size compared to BMP, and PNG are usually higher quality than JPEG, and GIF in my experienced.

There are shortcut buttons to make a new file, open a picture file, save file, save as file, and print a picture on the toolbar on Gpaint, and the File Menu.

Users can also rotate a picture left, or right, and flip it left or right, and top and bottom from the top or bottom with the built-in tools. There is also a save as desktop background, and take a screenshot of desktop button in GPaint’s Image Desktop menu.

Gpaint comes with a few cool effects like Sharpen, invert, smooth, Convert to Grayscale, and more.

In the windows menu you can open a new window to draw on another window, or close your current window in Gpaint. Gpaint can edit multiple images at the same time without using multiple instances, so it is very fast even when multiple images are being edited at once.

The Help Menu in the About section on GPaint shows its version, copyright information, and a link to its website.

GNU paint is a simple to use paint program which works on Linux based operating systems like Ubuntu, Raspbian, and Debian. It has tools like draw straight line, curve lines, circles, squares,etch which lets me draw shapes, add formatted text to images, change the color while drawing lines and shapes, or typing text, and fill shapes with different color. It has most of the features which I need in an everyday Paint program. GPaint also runs very quickly, and reliably when I use it on Raspbain on my Raspberry Pi 2 computer. It has never crashed, or froze when I use it on Raspbian to edit pictures, and create picture files.

Learn more about GNU Paint, and download it at http://www.gnu.org/software/gpaint/