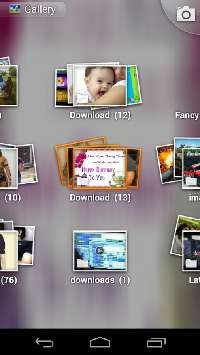 Gallery by AppGalaxy is a simple to use Picture, and video viewer app for Google Android. It also is under 1MB to download from Google Play, and works with Google Android 2.3 and up. Gallery has a media sorting, editing, sharing, rotating an image and background, contact setting tools for Android.

What I like most about Gallery is its small file size, fast performance, reliability, and the built-in picture editing and file management tools built-into Gallery.

Gallery took only a few seconds to download, and install onto my tablet. It also opens in a few seconds after I tap on its homescreen shortcut in Google Android’s homescreen. Gallery automatically scans for new pictures, and video on my tablet, and it can even see pictures and videos which got downloaded from Apps and games. The picture and video scanner is very fast, and it usually takes under a minute to find pictures and videos on my storage drive.It is also pretty easy to open a picture, or video file by tapping on the folder which it is located on, and taping on the picture and video which I want to view. It can also zoom in and out of pictures. Users can also view their image in Timeline, Grid, and Spiral view.

By touching the top left corner, you can sort albums by Time, Locations, Person, Group, or Favorites. Gallery also has a slideshow feature which starts a slideshow of your images in the gallery. Users can create a new Album with the New Album Feature.

Once the picture is being viewed, I can also make edits to it like cropping the image to make it smaller, by cropping the image into a smaller square where the background which is out of the square would be cut out. There are also tools in Gallery to rotate an image to the left, and right. You cam also delete the image if you don’t want it anymore. I can also select many folders to delete at the same time which is useful when deleting a lot of App advertisement and unwanted pictures, and videos which can take up many GBs of space. Deleting a lot of images, and videos at once is very fast. I just need to click the confirm button to allow the deletion of pictures, videos, and folders I don’t want, and the deletion only take a few seconds.

I can also share an image on a social networking app like Google Plus, Twitter, and Facebook from within Gallery. There are tools in the image viewer to set the image as the background for Android’s homescreen, or use the image as a contact picture for one of your contacts. You can also view the details of the image which shows information related to the image like its size.

I also like the simple video player in Gallery which I usually use to view videos on my device. The Gallery video player is very easy to use. I just need to click on a video thumbnail in a folder, and the video file starts playing in fullscreen in Gallery. Video playback is pretty smooth. The framerates of videos, and the audio quality of videos are pretty good when playing back an MP4 file in Gallery. There is a status bar, play/pause, rewind, and fast forward button. The buttons automatically hide after you have not used them foI also have the option of using another video player like VLC player for Android if I did not set Gallery as my Default video player for Android.

On the Top-Right of the mainscreen for Gallery, there is a Camera Icon Shortcut which quickly launches the Camera App to take photos, or videos which you can latter view on Gallery after you captured the picture or video.