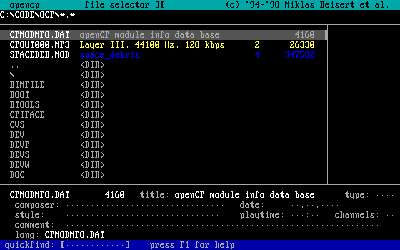 Open Cubic Player is one of the smallest, lightest running, and fastest running music and audio players for Windows 95-XP, DOS, UNIX, and Linux. This Audio Player should run on more older computers from the 1990s with a sound card, or onboard audio compared to other more modern music players with higher system requirements for more modern operating systems, and computer hardware.

Open Cubic Player also can run on very old computers from Windows 95-XP, DOS, UNIX, and Linux, so you can reuse your old computers to play music.

I think Open Cubic Player is one of the best music players for micro-computers like the Raspberry Pi, and similar micro-computers because the player is fast, lightweight, and uses very little storage space.

I use Open Cubic Player on my Raspberry Pi 2 computer with Raspbian Jessie Linux as its operating system. It performs, and runs very well on my Pi 2. The player only uses about 6MB of RAM, and 1% CPU power when playing an MP3 file in Raspbian. It starts up instantly, and have never crashed or slowed down when I used it on Raspbian Linux on my Raspberry Pi 2. It is a good audio player for quickly opening a song, and playing it while I use my Pi 2. Open Cubic Player also does not slow down my Pi 2, so it is a good audio player for using when open a more resource intensive program like the Minecraft game for Raspbian, or browsing the web on a website with a lot of JavaScript and HTML5 widgets on Raspbian’s web browser.

which I need to enter in the command line user interface, or Terminal window, and press enter to install it in Raspbian, and other Debian Linux operating systems. The install of Open Cubic Player with Raspbian takes only a few seconds to complete in my experience.

Open Cubic Player’s desktop shortcut is found in the Menu’s Sound and Video folder on the Applications Menu on the bottom left of the Raspbian desktop.

It also uses very little space on my Pi 2. I think it uses less than 1MB of storage space. Open Cubic Player is a good audio player for Raspbian Linux users who installed Raspbian Linux on a 4GB or smaller SD Card because of the low storage disk usage of Open Cubic Player, and how quick it runs on the Pi. It should run quick even if you use a slower Class 4 and below SD cards on your Raspberry Pi’s SD Memory card slot.

I can listen to music right away after installing Open Cubic Player on Raspbian. I did not need to manually configure any setting to make it work.

It starts up almost instantly after I click on the shortcut icon for it on my Raspberry Pi 2 Linux computer. It can also play many file formats like MP3, WAV, MID, CDA, XM, and other audio formats. I can even play OGG, and FLAC audio files on Open Cubic Player installed on Raspbian on the Raspberry Pi 2. It also can open, and explore files on a .PLS Audio Playlist file. 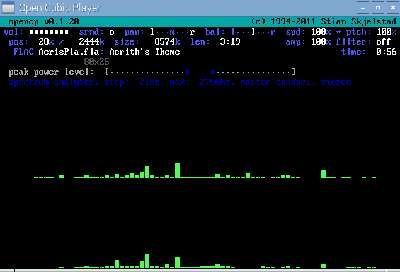 I like the clean user interface which is mostly text based, but also use colors. It has a basic file manager, so you don’t need to use another file manager to open audio files in the player. There is also a Quick Find search engine which you can use to high light titles of files by typing the name of the file on Open Cubic Player. Open Cubic Player has a nice retro design like DOS programs from the 1990s. You can make the player fullscreen by pressing the right-click button on your mouse. In Fullscreen mode the player uses up the full window. To exit fullscreen mode, you click the right button on your mouse again to use the player in the regular re-sizeable window to play music. The user interface for songs shows the name of folders, and files. I could use my mouse to click on folders, but I find using my up and down arrow buttons, and other buttons on the keyboard a lot faster at high lighting folders I want to view. Once I highlighted the folder, I just click Enter to open the highlighted folder. Open Cubic Player is easier to use, and navigate with my keyboard directional, enter, and other shortcut buttons. To pause a song, I press the p key on my keyboard to pause the song. To resume a paused song, I press on the p key again on my keyboard. To change the volume of a song you press the F2 Function key on your keyboard to decrease the volume, and the F3 key to increase the volume. There is a built-in help section in Open Cubic Player for learning how to do more advance tasks like looping a song, and information about visualizations.

To refresh your song file list in a folder, I recommend restarting Open Cubic Player by closing the program, and re-opening it. You can also go to another directory, and back to the original folder you are on to see if the file list refreshed,

Audio files’ titles like MP3 are colored gray for the text, it also shows the file extension on the right of the file title for audio tracks, and there is a brownish orange text on the right which shows information about the number of layers the audio file has, its frequency like 44100 Hz Channel numbers, bitrate like 128 kbps, and file size in bits. To play a song, you need to click on the song, or highlight it with your keyboard by pressing the up and down keys and pressing enter to play it.

To exit the visualization/player menu, and go back to the folder, I just need to left-click Open Cubic Player with my mouse.

I think Open Cubic Player is a good music player for users who want to quickly, and smoothly play a few songs on their computer, and don’t need the more advance online audio streaming features, playlist management, and other features found on bigger and heavier music players which use more system resources. It is also good at looping a song without any noticeable pauses which can affect the listening experience when looping certain files like Midi and background Music for video games where the song is designed to be loop forever without long silent pauses to add background music to video games, and programs when you are playing a certain level for many minutes, hours, or even days if it is a huge role playing game like Final Fantasy or Kingdom Hearts where you can play a level for many days without getting bored.

I haven’t figure out how to automatically make Open Cubic Player go to the next song in a folder, or Playlist file, or even know if it is possible, so I have to manually select a file to play every time a song ends in a folder, playlist, or drive. There is an option in its basic settings which you can access by pressing (ALT-C) with your keyboard to loop a single song forever. You need to press the number 4 on the keyboard to turn on the Loop module, and, lastly, press CTRL-S to save your settings. Looping a song forever is good if you want to play the same background music over and over again. There is also very little pausing when the song is looping, so the music keeps looping smoothly without sudden pauses like other music players. I think it would be a good idea to use a audio editing program to connect a few song files together to form one long continuous playing audio file if you want to play many songs at once by playing a longer audio files.

Open Cubic Player is one of the best lightweight music players for users who want an audio player which use very little CPU, RAM, and storage system resources because they care most about resource usage, stability, and reliability on a music player. The player is very lightweight, and does not have as many features as more visual intensive players, but it can still play a lot of different audio formats like MP3, WAV, OGG, FLAC, MID, and more. It can also be set to auto-repeat/loop an audio file continuously. Open Cubic Player works great on slower computers like the Raspberry Pi and other old and slow PC with a 700MHz or slower single-core mobile CPU, and 512MB or less RAM, basic onboard sound chip, and sometimes 2GB or less of storage space.

You can learn more about Open Cubic Player and download it at http://www.cubic.org/player/index.html