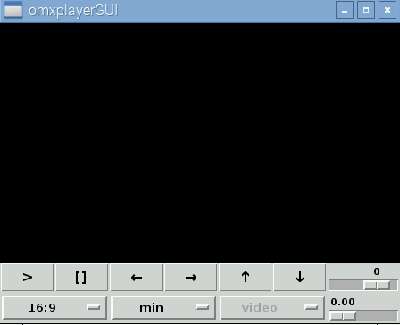 Kweb’s OmxplayerGUI is a simple to use frontend omxplayer user interface program which comes bundled with Kweb Web Browser which is also called Minimal Kiosk Web Browser. Kweb is one of the most lightweight, fastest and more modern Raspbian web browsers with HTML5, hardware accelerated video for smooth video playback in Kweb3, JavaScript, and CSS support. Omxplayer is a command line media player which can smoothly play most video, and audio file formats like mp4, and mp3. It is the default media player for Raspbian. Omxplayer is the only popular Raspbian media player which has hardware acceleration when playing back video files, so even HD video files playback smoothly in the Raspberry Pi because it uses the powerful video chip on the Pi. Omxplayer can be used to playback both locally stored video, audio, and media playlist files, and stream video and audio files from the internet or your local home network.

OmxplayerGUI is a great front end user interface program for omxplayer because OmxplayerGUI can be used to easily resize, and move videos to different positions on your monitor in real-time with your computer mouse, so no command lines, and keyboard shortcuts are needed to change the size, and position of a video window on a monitor. No command lines are needed to control omxplayer playback options like play, pause, rewind, fast forward with OmxplayerGUI, and all the keyboard shortcuts for omxplayer works on OmxplayerGUI.

The Kweb web browser also opens mnost web video files in the faster omxplayerGUI program, so online videos on websites play more smoother with better video frame rates on website HTML5 video players. There is even a Play button on Kweb web browser’s toolbar to play videos on a website with OmxplayerGUI instead of the website video player, so you can even close Kweb, and continue watching the video in OmxplayerGUI.

OmxplayerGUI is very easy to install by installing Kweb web browser from the command line. OmxplayerGUI is a bundled program with Kweb, but you can use OmxplayerGUI as a standalone omxplayer frontend desktop user interface program for omxplayer media player.

It was pretty easy for me to install Kweb in Raspbian Jessie which is the latest version of Raspbian for the Raspberry Pi. I just need to open a Terminal command line window from Raspbian or be logged into the command line interface, and enter a few commands which are

into the command line user inteface, and after the installation, the Kweb shortcut icons will be in the applications menu under the Internet section of the Applications menu on the bottom left of the Raspbian desktop.

The command lines for installing Kweb onto the older Raspbian Wheezy Operating systems are:

If you plan on watching online videos with Kweb, you need to download and install youtube-dl by opening the terminal command line and typing in

and pressing enter on your keyboard to install ytdl from Github. You can update ytdl by typing in

in the terminal command line program, and pressing enter on your keyboard.

If you are having problems using omxplayer and OmxplayerGUI on an older version of Raspbian Linux, you should update and upgrade Raspbian Linux with terminal by typing

in a terminal command line program which will update and upgrade Raspbian Linux. There are also upgrade and update buttons in the Application page in Kweb for quickly upgrading and updating Raspbian Linux. There is also a rpi-update for upgrading the firmware on your Raspberry Pi’s SD card. You would need to press ALT+a on your keyboard to use the buttons on the Applications page on Kweb browser.

OmxplayerGUI makes using omxplayer a great video player for beginners who want to do other tasks within Raspbian desktop while watching video like typing, web browsing, and office work while watching video. OmxplayerGUI can resize the size of a video with a mouse, so users can fit two or more windows on their monitor at the same time instead of just one fullscreen video which is how omxplayer plays video when users use omxplayer from the command-line user interface or command line program in Raspbian to open videos from the command line. Having the option to make the video window smaller can make low resolution video look less pixelated and blurry because you can resize them to close to their native video resolution. Sometimes resizing very high resolution video to a smaller window size can make them play smoother at higher video frame rates. But, Omxplayer can play HD video at very high frame rates when you use omxplayer, so it is not needed to resize higher resolution HD video files to make them play better.

I enjoy using regular media players more than fullscreen media center software because I sometimes find fullscreen media center programs kind of hard to learn how to use, and they limit me to only using the media center program for playing media, so I can’t browse the web while I watch video. Some media center software can also use a lot of storage space compared to regular video players which use less storage space. I think OmxplayerGUI does not use a lot of storage space because it is programmed in Python. Most Python programs I used on the Pi do not use a lot of storage space, and runs very quickly. I also like that OmxplayerGUI runs very fast where it can open a HD video files in a few seconds, and it takes about a second to open OmxplayerGUI from its application’s shortcut in the Applications menu in Raspbian Xsessions desktop or the Applications page in Kweb Web Browser. I can also right click on a media file like a video, audio, or playlist file with my mouse, and select OmxplayerGui to make the media file open in OmxplayerGui. You may need to select OmxplayerGui from the Open With file open wizard in the Sound and Video menu if the OmxplayerGui right-click mouse menu item does not appear in your right-click menu.

OmxplayerGUI player has buttons like play, pause, rewind, fast forward, volume slider, aspect ratio drop down menu, number of lines drop down menu seekbar, and an up, and down arrows buttons. In the OmxplayerGUI settings, you can set videos to be played in fullscreen with no buttons by setting the player to nogui.

OmxplayerGui’s main window, which you can open from the Application menu in Raspbian’s sound and video section, has a few button to open media files, play/stream links like http://example.com/video.mp4 , extract files, quit OmxplayerGui, and Edit Settings.

In the settings for OmxplayerGUI, you can turn off the Omxplayer buttons which makes video play in fullscreen with no buttons, and toolbars by clicking on the nogui button in the omxplayerGUI settings. You can also change the download folder for Kweb, and also change the more advance video and audio default settings for OmxplayerGUI. I set the default numbers of lines for the video to min for videos I want to play in OmxplayerGUI because I usually watch videos in a smaller window while I do something else on Raspbian like browse the web, type documents, and use other programs. I also rarely watch fullscreen video on my computer, so setting the default numbers of lines to min will make all videos play in a smaller Window.

Omxplayer, and OmxplayerGUI are both very stable programs, and never crashed or freeze on me when I use them both together to playback video and audio files on Raspbian Jessie Linux on my Raspberry Pi 2.

Kweb also comes with a Kiosk mode which you can use to run Kweb, OmxplayerGUI, and other programs in a very lightweight, and minimalistic desktop environment, so all your programs run faster, and open files faster than using the standard xsession, and LXDE desktop environments for Raspbian Linux. You would need to install the tint2 taskbar before you use Kweb in Kiosk mode. Using Kiosk mode is good for Raspberry Pi users who use the older Raspberry Pi 1 with a slower single-core 700Mhz CPU, and 256-512MB of Ram.

OmxplayerGUI is a one of the best omxplayer media player frontend program for Raspbian Linux for the Raspberry Pi because it can resize, and move videos, or control the playback like pause, play, stop, rewind, skip, and close a video and audio file in real-time with a computer mouse, so no complicated command lines and keyboard shortcuts are needed to do basic tasks. It also has all the standard playback buttons like play, stop, pause, volume, seek bar, next, and previous buttons on its user interface, so you can quickly control the playback of your video and audio files on omxplayer with your mouse. OmxplayerGUI and Omxplayer also very lightweight, and runs very fast when used to playback video on Raspbian Jessie Linux which is installed on the Raspberry Pi 2. OmxplayerGUI also never crashed, slowdowns, or freeze when I use it to playback video and audio files on Raspbian Linux’s Xsessions user interface, or Kweb’s Kiosk user interface.

You can learn more about KWeb and OmxplayerGUI, how to install them, and ask for Kweb help Raspberry Pi forum post at https://www.raspberrypi.org/forums/viewtopic.php?t=40860