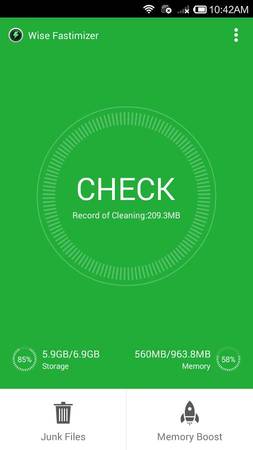 Wise Fastimizer Free is a simple, and fast system utility app for Google Android. Fastimizer safely deletes junk files like App cache, and residual files which are taking up space on your internal storage drive. It also stops unneeded background apps from running to free up RAM, so your device will run apps, and games faster because there is more free RAM to run apps and games after Fastimizer stops all the unneeded background apps. Fastimizer is made by Wise which makes the popular Wise 365 Care which is a popular system utility program for maintaining Windows PC.

I like the simple and modern green design of Fastimizer, and how fast the animations, scan and clean times are when I use Fastimizer on my older Asus Nexus 7 2012 tablet with a 1.3 GHz Nvidia Tegra 3 CPU, 1GB of RAM, 16GB of storage, and Google Android 5.1.1 Lollipop as its operating system. There are also no complicated settings in Fastimizer, so it is very easy to use.

There is also an update checker in Fastimizer menu to see if you are using the latest version of its app.

Fastimizer is very reliable when I use it. It has never crashed, freeze, or randomly restart after using it for a few days on Google Android.

Wise Fastimizer is a modern, fast, and simple to use disk clean up cache remover, and task killer app. It will help you get back free space which is used up by unneeded cache files from system and application apps. You would also get back free memory after Memory Boost kills unneeded background tasks which are using up a lot of RAM on your Google Android device.