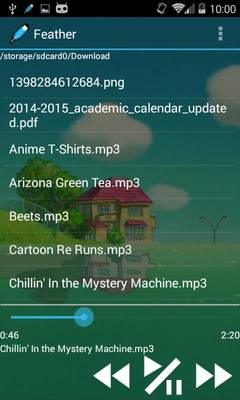 Feather is a simple to use music and video player app for Google Android. It only has the basic features like a playlist, file explorer, and play, pause, next, previous, shuffle, loop, seek bar and exit controls like other media players. There is no preview thumbnail images, and you need to rely on the title of the file, and extension to find and open media files in Feather within the playlist, or text based file manager. There are also no images on Feather, so everything loads quickly because there are no large images which can slow down Feather.

Feather is probably one of the fastest media players for Google Android because it does not have features like video thumbnails, media file external storage scans, and third-party non-native codecs which can slow down your device. It is also mostly text based, so Feather loads, and run very quickly.

Native codecs generally run more smoothly, and use less system resources than non-native media codecs which could be software-accelerated which is slower than hardware acceleration which uses your video chip, sound chip, and CPU to play the media file instead of mainly relying on software which can cause slowdown problems when playing video files, and higher quality audio files.

Video files played in Feather look clear, and run smoothly, and audio from MP3 files, and recorded in video sounds clear in Feather.

Audio from video and sound files also continues playing when the screen is off on my device. For sound files, I can use another app like a web browser, and still listen to music with Feather running in the background.

It is also possible to use the notification icon for feather to select a file to play, see what media file is playing.

Feather is compatible with most headset media controls for controlling media files like volume levels.

I like that Feather’s landscape view has no on-screen controls, and the controls only show up in vertical view for videos. Landscape view of videos also automatically display videos in Fullscreen mode, and hide the top titlebar, folder location bar, and Android notification bar in Feather when a video is playing in Fullscreen. Even when you click on the video in landscape mode, the video will not pause like other video players. You need to hold your device in portrait mode to use the play, pause, next, and previous buttons in Feather.The portrait view also has a small file explorer which you can use to quickly play another video or music file by tapping on the title in the playlist. I can also pause, play, skip to next file, skip to previous file, use the seekbar, and see how long the file is, and how long it was playing for in portrait mode.

Videos, and music files open pretty quickly in Feather, and using the built-in text file explorer is fast with no video and audio slowdown problems.

Feather is very stable, and fast, and rarely freeze, or crash. Video and music files play very smoothly, and open quickly in Feather.

The Quit button is useful for quickly closing Feather when I no longer want to use it, so Feather is not running in the background in Google Android using up RAM, and CPU resources.

The Feather text file manager let you play a folder’s, and folder’s sub-folder audio files including audio recorded in video files, add file to playlist, and delete unwanted files with the file manager. The file manager also shows you the current folder path in the top toolbar.

Feather is a nice lightweight media for quickly opening and playing media files in only a few seconds. It is mostly text based, so navigating to different folders, and using its playlist is very fast, and easy to do. It uses the native codecs in Android which work faster than third-party codecs for playing video and music on Android. Feather is one of the best media players for slower devices, or users who care most about speed, and stability.

Feather Free Music/Video App Size is 4MB to download from Google Play. Feather works with Google Android 4.0 and up.

Next post: How to Manually Hibernate/Force Stop Google Android Apps to use less RAM, and CPU resources