Background Video Player for Google Android keeps playing audio from video when using other Android apps, or when screen is off 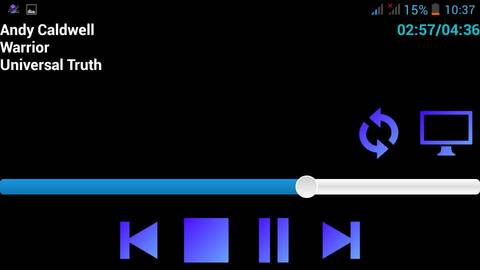 Background Video Player is a video player for Google Android. It can play videos in the background, so you can use it as a music player while you use other apps in Google Android, or turn off your screen, and the music continues playing on your speakers on your device. But, you can also use it as a lightweight basic video player with a playlist, and regular controls like play, pause, stop, next, previous, etc which features are found on other video players which can’t play your video’s sound in the background.

Being able to play video in the background is useful for users who have a lot of music videos, or video based ebooks which has someone talking in the video. Playing the audio from a video while the screen is off, or you are using another app like a text editor would help you save battery life because playing back audio uses less RAM, and CPU resources than playing back video in full screen mode.

Background Video Player is also very lightweight because its App is only 1.9MB in size and works with Google Android 2.3 Gingerbread, and up.

It is simple to use with most features like stop, pause, play, next, previous, seekbar, etc found on other video player apps.

It loads in a few seconds, and does not slow down my device when I use other apps like a web browser.

Background Video Player has touch gestures which make it easy for users to switch to the previous or next video by tapping on the left or right edge of the screen. You can also use the playlist on the frontpage of the video player to pick a video to play. The playlist sorts videos by alphabetical order, and displays the video thumbnail image, name of the video, and how long it is.

I like the dark, and purple user interface of Background Video Player, and the big buttons which make tapping on controls easier to do even on a smaller touchscreen.

Background Video Player is a simple to use video player app which can play video, and audio from video in the background of Android, or when the screen is off.

You can download Background Video Player from Google Play at https://play.google.com/store/apps/details?id=it.edop84.videoplayer