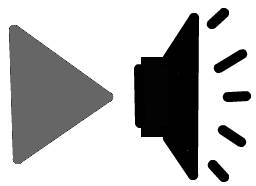 Sound and video problems sometimes can make your computer not have sound, or video, or slow and distorted sound and video which makes watching video impossible.

On some newer computers, the sound and video port/connector maybe the same port because they use a HDMI port to carry both sound, and video to your monitor or TV with speakers on them. A lot of video cards with HDMI ports also have a sound chip to transmit sound.

The first thing you should do is to check all your audio and monitor cables on your desktop computer to see if they are plugged into the correct port, not bent or broken, and is not loose. Sometimes with speakers, you may plug the speaker plug into the microphone, or line-in port when you should plug them into a green sound port on the back of your PC.

Next, check to see if your speakers and monitor are powered on, and the sound levels is turned up and not muted/off on both your hardware buttons or dials on your speakers, and Windows or other operating system Sound settings or your soundcard program. Also, check your brightness and contrast levels with your monitors settings buttons on your monitor to see if they are not set too low. In your video card drivers, and some programs like games, you can also change your brightness, and contrast settings without the need to use your monitor settings on your monitor, so you should check your video card, games, media player, and other video settings to see if the brightness and contrast are set to a comfortable level.

If you hear static or lose sound while playing back sound, it could mean your speakers are broken, or your sound card drivers are bad, and needs to be updated to the latest or previous version of a soundcard driver to fix the problem. I use an older version of Realtek sound drivers because newer versions don’t support 5.1 surround sound on my desktop computer, so my computer only can play 2.1 stereo sound on my 5.1 surround sound system when using the newest sound drivers.

If you use Linux, sometimes there are Linux drivers for soundcards which you can install to make sound work in Linux if your operating system did not already installed the sound drivers.

Software like Windows, games, media players, and media editors sometimes release patches, and updates to fix video and sound problems with their programs, so installing the latest patches, and updates for your software may fix your problems related to video and sound. If your video is slow when playing games, and watching higher quality video, your video card is probably not fast enough to run games at faster speeds, so you need to replace your video card with a faster one. Sometimes slow video performance can be caused by having not enough RAM, and a slow CPU which makes games and programs run slowly. Adding more RAM, and upgrading to a faster CPU could fix your slow video problems in games. Closing programs which you don’t need running in the background could fix your slow video problems as well because you’ll have more free RAM, and CPU resources once you closed programs which you don’t need running in the background.

Sometimes, broken RAM, motherboard, CPU, or other broken parts can make your computer have no video on the screen, or sound from the speakers. You can see if replacing the RAM brings back your video is. If your RAM is fine, it could be your motherboard, CPU, and other parts making your video blank on your monitor. A lot of newer video cards like the Nvidia Titan uses a lot of power, so it could be your power supply which is not supplying enough power to power your video card which is causing video and computer stability problems.

Replacing a monitor is pretty easy to do since you just need to unplug the old monitor from your computer, and install a new monitor. Replacing speakers is also easy. You need to unplug your old speakers, and plug in your new speakers.

A lot of computers these days have the soundcard built-into the motherboard, and the video chip built-into the CPU, so you can’t remove them without replacing your CPU, or motherboard. But, PCI, AGP, and PCI-Express video and sound cards are easily replaceable by taking the old sound or video card out, and installing the new one. Sometimes, if your video card is overheating, it is easy to fix by using compressed air to blow out dust from the video cards heatsink, or installing a better case cooling fan on your PC case to move more air out of your PC case to cool the video card, and your PC internal parts.

Replacing a sound card, and video card requires more work. You need to uninstall the older soundcard driver on Windows, and disable the soundcard in your computer’s motherboard BIOS if you are using onboard sound before you turn off your computer to install a PCI soundcard. There are also USB soundcards which makes installing a new sound card as simple as plugging in a USB plug into a USB port, and installing the correct drivers in Windows if the USB soundcard needs drivers to be installed from a CD. After you are done installing your soundcard, you can plug in your speaker cables into the sound ports on your soundcard to listen to sound.

If you are upgrading from onboard video to a AGP, or PCI-Express video card on your computer’s motherboard like Intel 4000 you should disable your onboard video in the BIOS before booting into Windows to install its videocard drivers for Windows.

For Ubuntu Linux, and other Linux distribution operating system users, they may need to download, and install third-party proprietary video card drivers from AMD, or Nvidia to play games, watch HD videos, and do video intensive tasks because the open source drivers for Linux sometimes are not very good at tasks like gaming. In Ubuntu Update settings, there is an Additional Drivers section which let you switch from the default video drivers to Nvidia and AMD video card drivers for improved video performance in the Additional drivers section.

Fixing sound and video on a desktop PC is usually pretty easy to do for most PC users. It can be as simple as re-plugging in a cable to the back of the video and sound port on the back of the PC, or re-installing the correct sound and video drivers. Replacing a video and sound card is not too hard to learn after you learned how to change an expansion card by reading a book on PC repair, or watching a tutorial video.

How do you usually fix sound and video problems on a PC?

Next post: Background Video Player for Google Android keeps playing audio from video when using other Android apps, or when screen is off