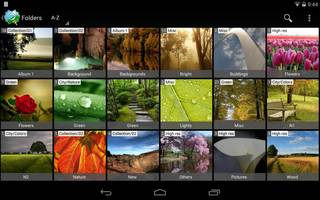 AA Image Viewer is a free picture viewer gallery app for viewing image files like jpeg, png, and gif in Google Android. AA Image viewer is simple to use, and fast. It only takes about a second to fully load AA Image Viewer in Google Android after tapping on its shortcut icon on my Homescreen Launcher. AA Image viewer also runs very fast, and never freeze or crash when I use it. It also has useful tools like image cropping, file management tools, and picture color editing to edit your picture’s brightness, contrast, saturation and heat controls in real time, and save the changes.

There is a Immersive mode for using your full screen size to view your images, and it hides the Google Android notification, and Navigational bar on the top and bottom of your screen.

AA Image Viewer also has its own rendering engine which displays images at a higher quality with its Standard, Natural and Clear picture rendering mode. Every mode uses a different antialiasing technique for showing an image. It displays high resolution images with less artifacts, and better accuracy at different Zoom levels.

AA Image viewer lets you sort your images by date, and name in ascending and descending order.

The thumbnail size of images are resizeable to small, medium, and large. There is also an option to display HD thumbnails, so thumbnail images look better.

It is also possible to show and hide the picture and folder filename and path in the settings. AA also shows you how many pictures are in each folder by putting a number on the top left corner of each folder thumbnail.

It also has Real-time auto-normalization and auto white balance.

You crop images by pinch to zoom into the area of the picture you want to crop, tap on the screen and tapping the save button on the menu with three vertical dots on the top right corner of the screen.

You can also change the Action bar with a custom colors like blue, red, gray, default android colors, and other colors in Google Android 5.0+ Lollipop. AA Image viewer also has a dark, and light user interface theme which you can change in the menu for AA Image Viewer.

You can use AA Image Viewer with devices which has x86 CPUs like the Intel Atom series of CPUs.

There is a compact cache feature to make the Cache size for AA Image Viewer use less disk space on your internal storage drive.

AA Image Viewer App size is a very small 326K in size, so you have more space on your internal storage for picture files. AA Picture Viewer can run on Google Android 4.0 and up.