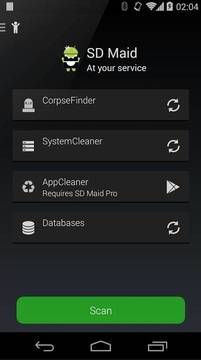 SD Maid is one of the fastest, and best system cleaning apps for Google Android. It also has useful features like a File Manager, File Search, App Control, Database Optimizer for browsing files, and speeding up your Google Android device. I have been using SD Maid for many months on my Google Android devices, and it works great at removing junk files which other cleaners do not clean up. It also has tools like Corpse File Finder, AppControl and, App database optimizer which is not available on many other cleaner apps.

The dark user interface is also easy to view even in low light conditions in a dark room.

SD Maid comes with a lot of useful file and app management, and junk file cleaning features on its free app to help users clean up, speed up, and improve the reliability of their Google Android device.

The Explorer in SD Maid is a File Manager which you can use to browse through files, and folders on Google Android’s storage drive. Searcher in SD Maid helps you search for files and folders by name.

One of the most useful tools in SD Maid is CorpseFinder which find Orphaned Files, and compares them to a list of installed apps on Google Android.

AppControl can freeze, reset and remove applications (including system apps). The System Cleaner cleans junk files which Google Android no longer needs. SD Maid includes a database optimizer which optimize database files, so they use less space, and run faster.

You also should be careful not to remove important files in SD Maid since it can be risky according to SD Maid description on Google Play which tells you to use SD Maid at your own risk.

SD Maid Free is a nice System Cleaner App for Google Android devices because it has a lot of useful features like App Controls, File Manager, CorpseFinder, Database optimizer and System Cleaner tools for users to use for free on SD Maid without the need to upgrade to the paid version if they don’t want to.