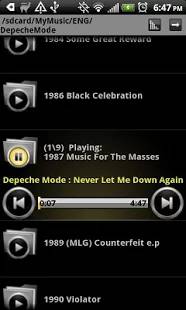 Folder Player is a simple music player for Google Android. You uses Folders to organize music instead of playlists. It can play MP3 files, and  FLAC, WAV, AAC, WMA, etc if your device supports playing other non-MP3 audio file formats. Folder Player can browse and play audio files, folders, or full folder trees.

It has most of the standard features like song repeat, shuffle, song loop once or forever, next and previous track, volume, and equalizer with presets for different types of music like pop, and rock.

There is also song tagging to make playlists, and audio file search. It also has some basic file and folder management features like move, delete, and browse folders.

Folder Player has no advertisements on its apps.

I like how fast Folder Player launches, and how quickly I can start using it for playing audio files after I launch the player. I just need to tap on the play button on a folder, or individual song to play it. The audio quality is good when I use it to play songs.

Going to the next track, and previous track is simple in Folder Player.

Folder Player rarely crash when I use it in Google Android.

Folder Player file size is also very small at around 2 MBs , so it take up a little space on my storage drive for Google Android. This player is great for smartphones and tablets with very little free space left on it.