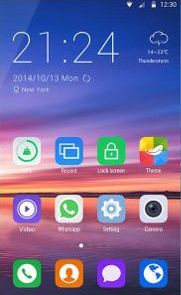 Zero Launcher is a attractive launcher which is also  fast and lightweight, and very customizable with custom themes, wallpaper, transition effects, homescreen widgets, and icon styles.

Zero launcher launches in under a second according to its description on Google Play. It also has a Small 3D engine with great 3D effects which run very smoothly on Google Android.

There is a RAM Booster homescreen widget to make recovering free RAM easier by just tapping on the RAM Boost Icon. Freeing up RAM can make games, and apps run faster, and also use less CPU resources.

The homescreen 3D transitions special effects also don’t slow down or freeze when I slide my finger to the right or left on Zero Launcher to change  from one homescreen to another.

Changing wallpapers, themes, and adding homescreen widgets to the homescreen in Zero only takes a few seconds, so I can fully change the look and feel of Zero Launcher by changing the wallpaper, themes, icons, and widgets in a few minutes, or less. Zero also comes with a free wallpaper, themes, and icon store where I can download and install a lot of free wallpapers, and themes which come with a wallpaper and custom icons for changing the look and feel of Zero. There are also themes for Zero’s Locker and SMS apps to make your Google Android user interface look the way you want it to look.

There are three transition effects for changing homescreen. The transition effects include Crystal, Cloth, and Smooth. Crystal makes your homescreen shine like a glass crystal when you flip between home screens, Cloth makes your screen looks like it is being twisted like a piece of cloth being twisted when you change homescreen, and Smooth just moves your app icons to the right or the left to show app icons on the other homescreens on Zero. I think Smooth is best for older and slower devices because it is the simplest animations with the least amount of effects compared to Crystal and Cloth which look nicer, but may use more processing power from your devices’ processor and video chip.

In Zero Launcher, it is possible to hide shortcut icons, unhide shortcut icons which you hid, group icons into folders, and make custom names for the folder them the way you want them to be organize. I have a lot of web browsers, games, media players, and chat apps installed on my Google Android device, so I make folders, by dragging and droping one app icon shortcut on top of another app shortcut icon, to organize my web browsers, games, media players, and chat apps into differently named folders. There is also a New Folders App in Zero where you can make a name for the folder, and select the un-categorize Apps which you want to put in the folders. To add uncategorized apps to folders, you press the + icon, and select the apps you want to put in the folder, or you can manually drap and drop uncategorize apps into folders which you already made. It is also possible to dissolve/unpack folders by dragging and droping a folder to the top of Zero Homescreen Launcher where there is a title called dissolve which appears when you long press a folder, so all the apps from the dissolved folder are displayed on the homescreen, and the empty folder is deleted.  You can also manually move app shortcuts out of a folder to the homescreen or the dock by long pressing on the app shortcut, and dragging it upwards than to its choosen empty location on the homescreen or dock.

I put the most used apps like Google Play, Amazon App store, and Web browsers on my homescreen and in my App dock on the bottom of my homescreen. The dock always show my dock shortcuts when I use Zero Launcher. The dock fits up to 5 app shortcuts, and folders depending what you set your Grid settings to in the Zero preferences. Adding shortcuts, and folders to Zero’s dock only requires me to drag and drop a shortcut icon from the homescreen, or folder to the dock, or a folder from the Homescreen to the dock. To remove shortcuts out of the dock, you just drag them to your homescreen, or a folder.

There are touch gestures in Zero Launcher to make launcher its search engine easy to do by just swiping my finger from the top to the bottom of Zero. The search engine in Zero let me search for locally installed apps, and launch them, and also search online with search engines like Google, and Yahoo, or websites like Wikipedia. The search engine also shows popular top searches which people are searching for on the search engine. Zero also displays app shortcuts of Apps which I launch from its search engine in Zero, so I can conveniently launch the search, and tap on an App shortcut which I launch with Zero. You can clear recently launch apps in your Search history in Zero, Swiping your finger from the bottom to top of Zero Launcher launches the Zero Menu where you can launch the Customization, Wallpaper, screens editor, preferences, Android settings, and Feedback app for Zero. Pinch to Zoom gesture in Zero brings up the homescreen editor where you can add and remove homescreens, and re-arrange homescreens order. Long pressing on an empty spot on Zero brings up the customization editor where you can add a widget, change the transition animation, change the wallpaper, and change the theme in Zero browser. When you long press on an App shortcut with your finger, you can drag it to the top of the screen in Zero where you can hide its shortcut, uninstall the app from your device, or see its details page in Google Android where you can uninstall the app, clear App cache, clear the app’s data, and see App’s permissions.

There is also a Zero notifications bar Remote control app with a Z in your Android notification bar which lets you easily turn on and off Wi-fi, Data, Ringer, Flashlight/Torch, launch Clean Master if you have Clean Master installed, and use Booster by clicking on icons on Zero Notifications bar Remote control app. You can turn off the Zero remote app by turning it off in the preferences by clicking on the Quick Switch slider button.

Zero Launcher also comes with a weather homescreen widget for telling you what’s the current weather for your home town on Zero launcher’s home screen. There is also a time and date widget on Zero which displays the time, and data for your device’s location. There is also a Best Apps, and Games widget, and App recommendation app for recommending you new apps and apps used by local Zero users to try on Google Android. There is also a Recent Apps widget for seeing what Apps I launch recently, so I can quickly launch recently launched apps from the Recent Apps Widgets. You can also quickly clear your recent apps history if you do not want other users to see what recent apps you used on Google Android.

The Icon Shortcut is an App in Zero which puts zero in an editing mode where you can easily drag and drop app shortcut widgets to different locations on your homescreen, and also make new homescreens by swiping my finger until I reach the last screen on the right, and press the + button to add another homescreen to Zero. You can also select two or more shortcuts by taping on them, and they would be move to a dock where you can make a folder for the icons which you selected by clicking on the New folder button which appears on the right of the dock when you press on the New folder button.

The Zero Locker is a lightweight lockscreen replacement for Google Android for Zero Launcher. With Locker, you can install custom skins/themes with for your lock screen to change its lockscreen appearance, animations and features. Some of the lockscreens have fun games in them like a basketball hoops game which show a basketball being thrown into the hoop when you unlock your smartphone or tablet by swiping your finger upwards.

Zero SMS is a replacement SMS/MMS text message smartphone app which is lightweight, fast, and customizable with many free themes, and emoji Zero SMS is only 1.5MB in size, and launches in under a second. It also has privacy, and anti-harassment features built-in. There is a Private box feature which protect your privacy anytime, anywhere. The harassment interceptor intelligently blocks   blocks blacklist/keywords and filter spam messages. It is possible to add custom ringtones for each person who text message you

In the preferences of Zero, You can make Zero your default launcher, turn on and off infinite scrolling, and quick switch, change the number of rows and columns in Zero, access the customize settings, locker settings, and language settings. There is also Share, About, and Restart Zero, Features Tutorial which is a tutorial, which shows you a video on how to use most of the main features in Zero Launcher, and Feedback features found under the More title in Preferences for Zero.

Zero Launcher is a fast, lightweight, simple to use launcher which also has a lot of useful features, and customization options for fully custumizing Zero’s appearance, and settings.