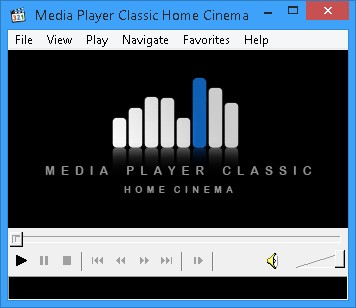 Media Player Classic Home Cinema is one of the fastest and most lightweight free media player programs for Windows computers. I have been using it for many years to play video files in Windows. It can also be used to play audio files as well.

It can play a lot of different video like mp4, avi, wmv, and mkv and audio like MP3, wav, and ogg file formats. It can basically play all the media files which are on my computer. It is very rare that it can’t play a video or audio file in my experience.

It only takes a few seconds to open the media player after clicking on the desktop or startmenu shortcut. Opening and playing 1080P HD MP4 video files takes only a few seconds on my computer with an Intel Core2Dou 1.86GHz CPU, 1GB of RAM, Nvidia GT 620 1GB video card, and Windows 8.1. Media Player Classic only uses about 1-2% CPU, and 50MB of RAM when playing back a 1080P MP4 file on my computer according to Windows 8.1 task manager. You also save a few minutes to hours of battery life when you use Media Player Classic to playback a video instead of using more heavy video players which use more RAM, and CPU resources which would affect your battery life in Windows, or make your computer use more electricity.

Opening a music MP3 file is also very fast, and only take a second to do. The music playback quality is pretty good. There is no sound problems like static, lag, stuttering, and other sound problems. The sound is very clear when listening to music with Media Player Classic. Media Player Classic uses less than 1% CPU, and 5.9MB of RAM when playing back music in Windows 8.1 according to Windows 8.1 task manager, so Media Player Classic is a great light weight music player for listening to music without slowing down your PC, or draining your laptop or tablet battery while using up more electricity.

Media Player Classic is the best media player for quickly opening video or audio files, so you can more quickly enjoy watching videos, or listening to music rather than waiting for them to open, or dealing with slowdown problems. It works great even on slower Windows computers.

Media Player Classic is also open source like Linux, and it has no spyware, advertising or adware on it.

You can download and learn more about Windows Media Player Classic Home Cinema at http://mpc-hc.org/

The installer download size for Media Player Classic is only about 10MB in size. It can be installed on Windows XP, Vista, 7, 8/8.1, and other versions of Windows like Windows 2003.