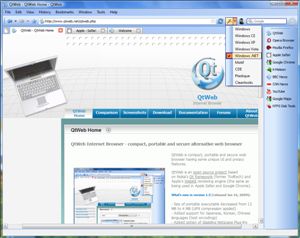 QtWeb Internet browser is a fast, stable, and easy to use web browser for desktop and laptop computers.

Qtweb has most of the features on mainstream web browsers. It has bookmarks support, web search, navigational buttons, browsing history, private browsing, tab browsing, Bittorrent file download, HTML5 support,  support for Adobe flash player, and other popular plug-ins. It also runs on Webkit which is the same web browser technology which is used in Google Chrome, and Apple’s Safari web browser. It also uses Nokia’s Qt framework which is very small, and fast that it can be used on Bootable CD operating systems like Windows PE which can run off a CD-ROM disc. I used Qtweb to visit big sites like YouTube, and it runs pretty well, and does not slow down my computer when playing HD video.

I like the minimal and compact design of QtWeb user interface where it does not take up a lot of screen space, so I can view more of the website without scrolling down the page even on lower resolution monitors. There are also not a lot of buttons, and menus which make the browser hard to use, or find buttons like the stop, and refresh button on the navigational toolbar.

Qtweb is also customizable. You can change the look of Qtweb by hiding toolbars like the statusbar, bookmark bar, navigation bar, or making the browser full screen in the view settings. It also comes with a few skins to change the look and color of the Qtweb windows and scroll bars, and buttons.

The download size for Qtweb is only 8MB for Windows, 12.7MB for Apple Mac, and 12.3 MB for Linux and Unix. You just need 128MB of RAM to run it. It is also compatible with Windows 2000-Windows 8.1, Mac OS X, and many different Linux and Unix Operating Systems. You can also carry Qtweb on a USB drive or CD/DVD disc to use it from an external drive on another computer without installing it. The executable file size of QtWeb is only 6MB, so it opens very fast because of the small .exe size.

QtWeb is also a secure browser with a private browsing feature like other mainstream browsers. It is also pretty easy to clear cookies, history, and cache to keep your browser history private from other internet users who also use QtWeb, and the same user account on your PC. It also supports HTTPS/SSL, and display the certificate information on its browser to let you know that the SSL site like a banking website is safe.There is also Full Reset which will clear your cache, and history info on QtWeb, and settings to its original settings.It also has adblocking which blocks ads and counters for faster web browsing.

Qtweb runs quickly on computers with 512MB-1GB of RAM, and single to dual core CPUs in my experience. It is one of the best web browsers for slower computers which have less than 3GB of RAM, and a slower CPU like a 1.6 GHz Intel Pentium 4 Single Core CPU.

Using QtWeb may also save you some electricity or battery life because of the low CPU, and RAM usage of the browser compared to more heavy mainstream web browsers which uses many hundreds of MBs of RAM, and a lot of CPU resources which can also make your PC run slower, and hotter while also decreasing the battery life on laptops, and using more power on desktop computers.

QtWeb doesn’t slow down as much as other more popular web browsers when I use it on computers with 256MB of RAM, and a Single Core CPU.  In Windows 8.1, Qtweb uses 85MB out of 1024MB of RAM and less than 1% CPU on an Intel Core2Dou 1.8 GHz CPU when visiting reddit.com/r/tech with one tab open on the web browsers. Qtweb is a good web browser for cheaper $100-300 Windows 8.1 tablets, and netbooks or older computers which may only have 256MB-1GB of RAM, and a slower CPU like an Intel Atom or Celeron.

The time it takes to open QtWeb browser is also very fast even when other big programs like other web browsers, video players, and Office suites are running in the background, or when Windows is still starting up startup programs like antivirus, firewall, and chat programs after logging into Windows. It usually only takes 1-4 seconds to start up Qtweb in my experience compared to many more seconds with other web browser. There is also no slowdown after it has start up unlike some web browsers which has slowdown problems for the first few seconds to minutes after startup, or is unusable until everything has loaded.

Restarting Qtweb is even faster. It only takes about a second to restart the web browser when I closed it, and open it again by clicking on the desktop shortcut for it. It also only takes a second to close the browser.

On my computer, Qtweb is pretty stable, and rarely crashes, or freezes. I also rarely see those “not responding” errors which pop-up more on other browsers I used.

Scrolling and and down websites is also pretty smooth in Qtweb. Websites also load pretty quickly on my 10 Mb/s cable wired internet connection, and on Wifi when I use Qtweb. It is also pretty fast when minimizing, restoring, maximizing, and resizing the QTweb web browser window.

You can download, or learn more about QtWeb Internet browser at http://qtweb.net/