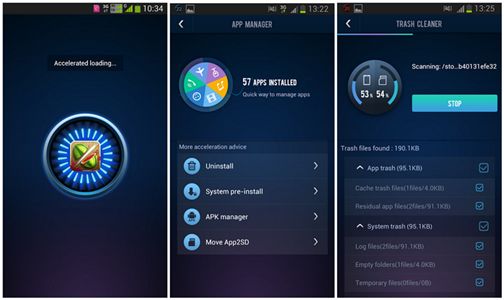 Du Speed Booster Free is a simple and fast system utility app for maintaining the speed, security, and stability of your Google Android smartphones and tablets.  Du Speed Booster speeds up your device by stopping background programs from running, optimizing start-up programs, cleaning your app cache, and other types of junk files. It also has an antivirus program built-in which protects Android from virus apps, so virus programs don’t slow down your phone while infecting it. All you need to do is click on the “Detect Now” button on DU Speed Booster to scan and repair problems on your device. It also gives you a score on how good your phone is running. After you have repaired your problems, your score should be 100 points. Scans and repairs with Speed Booster takes less than a minute in my experience, and it is pretty easy to use.

Speed Booster claims to speed up Google Android mobile devices by up to 60%.

I like the modern sleek user interface of Du Speed Booster which make using this app very easy, and nice to use on a daily basis to maintain Google Android’s performance, security, and stability.

There is also Smart Cleaner which does automatic cleanup of unwanted processes and trash to make maintaining a Google Android device very easy.

There are features like Game Booster which boost the performance of your mobile games which are installed on your device.

Speed Accelerator in Du Speed Booster speeds up your device by stopping background apps, and auto-startup apps from starting, and using up your RAM, and CPU resources. You can also freeze app manager to free up memory on your phone or tablet. In Speed Accelerator, you can also setup regular cleaning to stop unwanted tasks, and clean up junk files on a regular basis, so you do not need to manually maintain your device as much to save you time.

The Trash Cleaner is used to delete cache files, empty folders,  and other junk which you don’t need. It also can find big files which you may have forgotten about after you downloaded them from the internet, but are using up a lot of space on your phone. You can also remove residual apps, and files which are left over from uninstalled apps which you no longer need any more.

The Apps Manager in Du Speed Booster makes it easy for you to uninstall apps which you installed on your device, and system pre-installed apps which came with Google Android. You need to root your device to uninstall system apps like Google Chrome, and YouTube. There is also Apps to SD which moves Apps to an SD card if your phone or tablet supports Apps to SD card. App Manager also searches your device for APK files which are safe to delete to free up storage space once you installed the APK app in Android.

The security app in Speed Booster is an Antivirus which scans your apps, files, Android and sd card on your device for malware, virus, and trojan apps, and files which can harm your device, and spy on you.

Security also has a permission manager to find apps which may have permissions to read your text, access the internet, and turn on Wi-Fi.

There is also a shortcut to DU Battery Saver for you to download from Google Play, or open if you already have Battery Saver installed on your smartphone or tablet.

Du Speed Booster also come with Home Screen widgets which make it easy for you to boost Google Android performance, turn off Wi-Fi, accelerate your device, stop background apps, adjust settings, and do other tasks from your Google Android homescreen. There is also a homescreen floating widget which is a shaped of a circular badge which you can drag to the bottom of the screen with your finger to stop background tasks to quickly free up RAM, and CPU resources.

To take advantage of some of the features like uninstalling pre-installed System Apps like Google Chrome, YouTube, etc, freezing Android app manager to free up RAM, and disabling start-up apps with DU Speed Booster, you would need to root your device to give it root access.

You can download Du Speed Booster from Google Play at https://play.google.com/store/apps/details?id=com.dianxinos.optimizer.duplay