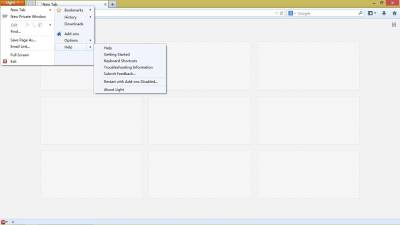 Light Firefox is a fast, and light Firefox based web browser which can run faster on slower computers. Light runs faster because a lot of the un-needed features for Firefox are removed from Light. I use Light Firefox on my older computer with 1GB of RAM, and a dual-core CPU running Windows 8.1. Scrolling up and down websites, loading websites, switching tabs, minimizing, and maximizing light windows, and opening and closing Light web browser is a lot faster with Light web browser in my experience. I notice that Light Firefox seems to crash less, and I rarely get those Not Responding errors which I get in the regular version of Firefox. Light Firefox also uses less RAM, and CPU resources in my experience, so it runs faster than other web browsers.

Light Firefox is now my main web browser which I use because it runs the fastest, and also supports useful Firefox add-ons like Videodownload helper, Firebug, NoScript and FireFTP which other alternative web browsers do not support.  Light also uses the latest version of Firefox 31 compared to other non-official Firefox based web browsers which use older versions of Firefox like 24.6.2 instead of Firefox 31.

Using Light is a good alternative to buying a newer PC just to surf the web and do a few office tasks like word processing. Light Firefox is free, and works great on older computer, and should run very fast on newer computers. I even tried Light on an older Windows XP computer with a single core 1.6GHz CPU, 256MB of RAM, and older video card, and Light runs better than other web browsers in my experience on my older Windows XP computer.

Having a lighter running web browser can improve your laptop, or Windows tablet’s battery life, and also save some electricity, and make your computer run better with fewer slow down and stability problems caused by your web browser using too much RAM, and CPU resources.

Light Firefox also has most of the features like tabs, support for add-ons, themes, spell check, autofill, plug-ins, hardware acceleration, bookmarks, etc that the regular version of Firefox 30 have. One of the main advantage of Light Firefox is that it supports all Firefox add-ons, and plugins which I tried on it.

If the regular version of Firefox, Chrome, and Internet Explorer runs slow on your Windows based computer, I recommend you use Light Firefox to speed up your web browsing experience by using a Lighter web browser based on Firefox.