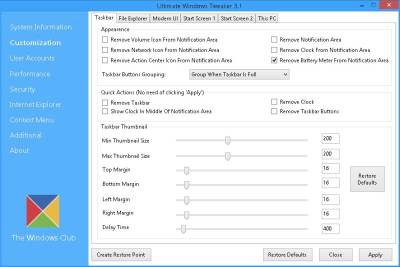 Ultimate Windows Tweaker 3.1 is a free Windows tweak utility to tweak Windows 8-8.1 easily by just checking check boxes, moving slider buttons, and choosing options from drop down menu. It is a lot safer, and easier to use than using a Registry Editor or Windows command prompt which is difficult for most computer users. It is a great tool for optimizing Windows to run faster, so PC Games, web browsing, and using Windows is faster. It is also safer than using other programs to tweak Windows because there are description, restore default, and create system restore which makes the chance of messing up Windows a lot less unlikely compared to other Windows tweakers. There are also a lot of tweaks to make Windows 8-8.1 easier to use like disabling the lock screen, and making Windows start to desktop instead of the fullscreen Start Screen after you logged into Windows with your user account.

It is amazing that Ultimate Windows Tweaker has over 170 tweaks for changing Windows settings which will make Windows faster, look better, easier to use, crash less, and improve security of Windows 8.

Ultimate Windows Tweaker for Windows 8-8.1 is only 340 KB in file size and has over 170 tweaks for Windows 8. It also does not require installation since you just need to unzip the zip folder to extract it, and run it.

Ultimate Windows Tweaker also won’t slow down Windows by starting during Windows Startup like other system utility programs which startup during Windows login, and adds an automatic service to the services section of Windows.

My favorite tweaks are the performance tweaks because I own an older computer which just have a dual-core CPU with 1GB of RAM, so saving a little bit of RAM like 100MB, and saving extra CPU cycles like 10-20 percent of the total CPU power by enabling performance tweaks can make Windows 8.1 faster on my computer because it won’t need to use the swap/page file, and lower my CPU usage which can make my computer open files faster, and play games with less lag without the need to install more RAM, or a faster CPU which can be expensive if I hire someone to install a new CPU, and add more RAM to my system.

Disabling Windows settings, services, and programs in Ultimate Windows Tweaker may also make Windows more reliable, crash not as much, and freeze less while also improving your system performance in Windows.

There are also tweaks to make Windows 8-8.1 easier to use like starting up a non-touchscreen desktop and laptop computer directly to the desktop instead of the Start Screen, and turning off the lockscreen for the user login page which appear after your computer has booted up. You can also use Ultimate Windows Tweaker to make the taskbar icons smaller, and hide unwanted icons like the Action Center.

You can also disable many security features like Control Panel, Registry Editor, Command Prompt which you do not want computer users to use, so they are less likely to mess up Windows.

The Internet Explorer tweaks are useful if you need to customize IE. There are also tweaks to tweak the context menu in Windows Explorer, and the Start screen.

In the Additional section, there are tweaks to make your network faster, and more secure.

You can also use Ultimate Windows Tweaker 3.1 to see what CPU your computer is using, how much memory is installed in your PC,  what version of Windows 8 you are using,  your username, and computer name. You can also access Advance Recovery Options like System Restore, and Recovery Drive from the System Information section. There is also a shortcut to the System File Checker Utility in the System Information section.