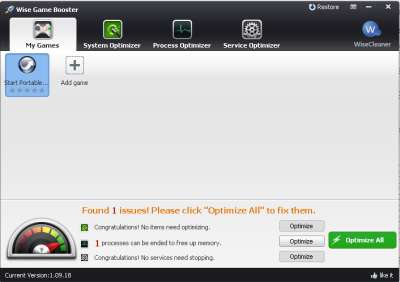 Sometimes your computer run games, and large programs like web browsers, photo editors, video editors, and office suite slowly because your computer is being slowed down by other programs and services running in the background, and unoptimized Windows settings. Wise Game Booster can help improve your performance by optimizing Windows settings, ending background programs, and services to free up RAM and CPU cycles, so your games, and programs have more RAM, and CPU cycles to use to run faster than before.

Using Game Booster is free, easier, and less expensive than upgrading your physical RAM,  and CPU to increase the amount of free RAM, and CPU Cycles to run programs more fast.

I been using Game Booster to Boost my Windows 8 computer with only a dual core 1.8GHz CPU, and 1 GB of RAM, and programs run faster and more stable after I used Game Booster.

Wise Game Booster is a free gaming utility, and game launcher program which can free up RAM, and CPU resources in only a few seconds with a few clicks of the mouse. It also has a games, and programs launcher which you can use to launch programs, and games with one click of the mouse.  Game Booster is safe to use since it does not make permanent changes to your Windows operating system, and everything it does can be changed back by using the restore and resume wizards, or restarting your PC.

It has a System Optimizer in Gamebooster to change settings in Windows to make Windows more stable, and faster for both Windows and your internet and network speed faster.

There is a Service Optimizer in Game Booster which let you end background services from Windows, or third party software services. Wise Game Booster also recommend which services are safe to end, and which you can keep. You can also end some services like Security Center, Third part services from hardware, and software which you don’t plan to use, Network List, and Network Location Awareness to free up even more RAM while gaming, and using large programs in Windows.

In the Restore section of Wise Game Booster, you can restart services to start one service or all services you stopped, so they will start again on Windows. Alternatively, doing a Windows Computer restart, or shutdown and power on will restart all your services as well.

Wise Game Booster is one of the best booster programs for Windows computers to make games, and programs run faster because of more RAM, and CPU Cycles which Game Booster free up by stopping background programs and services, and optimizing Windows settings.

You can download Wise Game Booster for free at wisecleaner.com/wisegameboosterfree.html