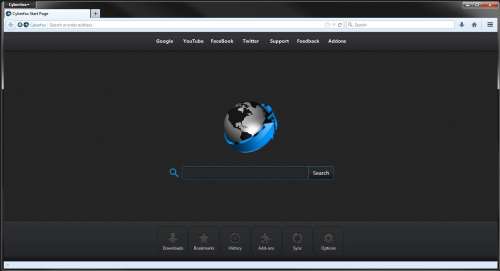 8pecxstudios’ Cyberfox is a custom web browsor which is based on Mozilla Firefox’s source code. Cyberfox has different versions of its web browser which are optimized for Intel and AMD x86 and 64 Bit CPUs, and Windows x86 and 64 bit operating systems like 8, 8.1, and 10.

Cyberfox has most of the important features of Firefox like add-ons, themes, extensions, support for plug-ins like Adobe Flash Player and Java, bookmarks, history, Firefox sync, download manager, private incognito web browser, etc. Users of Cyberfox won’t miss out on most of the important features of Firefox, and there are some exclusive Cyberfox features like CPU optimizations, Restart browser buttons, and customization features which are only found on Cyberfox, but are not found on Firefox, and other Firefox based web browsers,

But, you can run Cyberfox very reliably on a Windows 32Bit operating system in my experience. Cyberfox also does not come with features like sponsored tiles, health-reports, and telemetry, so it can run slightly faster than the regular version of Firefox.

There is also a portable version of Cyberfox which you can install onto a external USB drive to run Cyberfox and your add-ons and settings on other Windows computer.

Cyberfox for Intel x86 runs fast on my Windows 10 32bit installed computer with an Intel Core2Dou 1.86 GHz CPU, 3 GB of RAM, 320 GB hard drive and Nvidia GT 620 1 GB video card. It also seems to use less RAM and CPU resources compared to other modern web browsers for Windows when I use Cyberfox. Cyberfox is very reliable because it rarely freeze, or crash after using it for a few hours per day with many tabs open on Cyberfox on my computer.

Cyberfox also is compatible with the many add-ons, plug-ins, and themes available at Firefox’s add-on and themes site. I can also disable Firefox features which I don’t use like Pocket, Reader Mode in the customize wizard program, and WebRTC peer connections, Geolocation, user interface buttons like Restart browser, and other features and buttons which I don’t use in Cyberfox options.

Un-needed Firefox features like Telemetry, Health-report, Sponsored tiles & other components that collected information are removed from Cyberfox, so users have better privacy, no sponsored ad tiles, and a faster and light running web browser.

The Customize Cyberfox wizard program lets you customize the look and feel of Cyberfox to best fit your needs, and computer’s performance.

Users can also run Firefox and Cyberfox on the same Windows computer, so you won’t lose access to Firefox after you installed Cyberfox.

Download Cyberfox for Windows Intel and AMD based computers at https://cyberfox.8pecxstudios.com/

Cyberfox supports Windows 7, 8/8.1, and 10, but XP, and Vista are unsupported. If your computer runs Windows 7-10, it should be able to run Cyberfox. Cyberfox recommends that a computer has 400MB of free hard drive space.

Which Intel and AMD version of Cyberfox should you install on Windows 7, 8/8.1 or 10?

You need to first find out what version of Windows you are using, and type of CPU which is installed on your computer. You also need to know if your CPU is a 32bit or 64bit CPU before picking the right version of Cyberfox for your version of Windows, and CPU type.

Users who should use the 32Bit Intel version of Cyberfox

If you use Windows 32bit Operating system like Windows 7 32bit on an Intel Pentium 4 or newer computer, you should download the Intel x86 version of Cyberfox.

Users who should use the 32Bit AMD version of Cyberfox

If you use Windows 32bit Operating system on an AMD Athlon XP 2400+ or newer computer, you should download the AMD x86 version of Cyberfox.

Note: I think Windows 32Bit operating systems can’t run 64bit software even if your CPU is a 64bit CPU like Intel Core2Dou or AMD 64bit CPU. If you use a 64bit CPU, on a Windows 32Bit OS, you can only run 32bit version of Cyberfox.

Users who should use the Intel 64Bit version of Cyberfox

If you use Windows 64bit Operating system on an Intel 64bit CPU computer, you should download the Intel 64bit version of Cyberfox.

Users who should use the AMD 64Bit version of Cyberfox

If you use Windows 64bit Operating system like Windows 10 64bit on an AMD 64bit CPU computer, you should download the AMD 64bit version of Cyberfox.