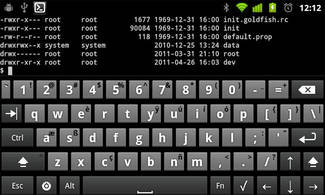 Hacker’s Keyboard is a nice free full featured QWERTY keyboard which has buttons like Tab/Ctrl/Esc  buttons, Windows/command ❖ button and directional arrow buttons which are not found on most keyboard apps for Google Android. It is similar to a regular desktop PC or Laptop keyboard’s layout with many useful buttons like TAB, CTRL, ESC, and Directional arrow buttons. The keyboard also has voice input.

Hacker’s keyboard lets users to perform shortcut commands using this keyboard because it has CTRL, and ALT which are use for common shortcut commands within Windows, Linux, Android, and Mac. You do not need to press the CTRL and Letter Key at the same time. But, you need to press the CTRL button first, and secondly press a letter key like V, C, X, etc to perform a shortcut keyboard command.

For Example, when you press the CTRL Button and V button, you can paste text. CTRL+C  will copy text, CTRL+X will cut text, and CTRL+A will select all text when you use Hacker’s Keyboard to perform shortcut commands in Android, or a remote access app to remotely use Windows, Mac, and Linux within Android with a remote desktop app.

There is an useful input method buttons for users to quickly switch from Hacker Keyboard to another Keyboard like the Android Keyboard which is turned on, and installed on Android without using the Android setting’s app’s Keyboard and Input settings.

Hacker’s Keyboard has many settings like voice input, word suggestion, keyboard buttons which you can turn on, and off to best fit your typing needs,  device specs, and mobile device like smartphone, phablet, and tablet.

Hacker’s Keyboard is my favorite keyboard apps because the directional arrow buttons are very useful. I use the arrows along with the backspace key a lot to make small edits to miss spelled words by moving the text cursor to the wrongly spelled word, and use the backspace key to edit a word to correct letter to change the word to the correct spelling for the word. Using the directional buttons is a lot easier than using my finger to slowly, and manually tap on the right text position between two letters to move the cursor to where I want it to be, so I can quickly edit text without backspacing whole words, or many characters. I prefer manually using the directional keys to manually correct spelling mistakes instead of using word suggestions, and auto correct which I find kind of annoying to use since it makes me feel like I’m in a hurry when I see text popping up, and auto-correcting which is not as accurate sometimes as just manually using the directional keys and backspace keys to backspace wrongly spelled letters, and typing in the correct letters with Hacker’s keyboard.

Hacker’s Keyboard is one of the best keyboard apps for using remote desktop, and SSH apps like  ConnectBot because it has most of the buttons found on a regular PC keyboard, so you can more easily use remote desktop and SSH apps to control a desktop PC or server.

There are no ads, unwanted permissions, and app recommendations on the keyboard. It also does not show annoying notifications ads, and pop-ups like other free apps.

Hacker’s  keyboard’s size is also adjustable, so I can comfortable use it on bigger and smaller tablets, and phones by adjusting its height. It is possible to change both the portrait and landscape size of the keyboard to different sizes. For example, the portrait size for Hacker’s Keyboard can be set to 60%, and the landscape size can be set to 50% in the settings for this keyboard app. I like making the size of the portrait keyboard layout bigger, so it is easier to type on buttons with fewer typing mistakes because the size of the buttons are bigger.

You can also set the Keyboard to the 5 line keyboard with numbers on top in portrait mode in the settings of Hacker’s Keyboard. If you type a lot of numbers, the 5 row keyboard is very useful for users who type a lot of numbers. The 5 line keyboard layout automatically shows up in landscape typing mode, but you can setup the keyboard to the 4 line mode in the settings when typing in Landscape mode. The 4 Line mode does not have directional key, and uses less space, so it is better for devices with smaller low resolution screens.

The keyboard layout also looks similar to the Android 2.3 Gingerbread keyboard because Hacker’s Keyboard is based on the 2.3 Android keyboard. If you used Google Android 2.3, it would be easy to get used to the layout of Hacker’s Keyboard. It has multitouch for the modifier keys like the Android 2.3 Keyboard. It also has most of the features like word suggestions, voice input, input language, auto-capitalization,  double tap shift mode, shift lock, key feed back like sound, letter pop-up, vibration, etc, gesture and key actions, ctrl key code, alt key code, meta key code, sliding key event, pop-up mini keyboard contents, long-press duration, quick fix word suggestion, show suggestion, and more features which you can find in its settings.

There are also a few built-in themes like a dark, light, transparent, and Stone theme to change the color and appearance of Hacker’s Keyboard.

Hacker’s Keyboard is a full featured lightweight keyboard with many useful buttons, and features for typing out text on Google Android.

Hacker’s Keyboard is compatible with Google Android 2.2 and up.

If you need the English completion dictionary for Hacker’s Keyboard to complete words while typing you can download it at https://play.google.com/store/apps/details?id=org.pocketworkstation.dict.en and it is only 615K in size. It works with Google Android 2.2 and up.

There are also other Language Completion Dictionary for Hacker’s Keyboard available at https://play.google.com/store/apps/developer?id=Klaus+Weidner