by Johnson Yip on February 19, 2016
in System Utility Programs, Windows 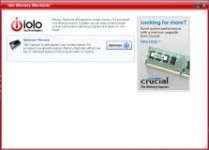 iolo Memory Mechanic is a simple free RAM Optimization program for Windows PC. Memory Mechanic is made by iolo which is the same company which make the popular System Mechanic System utility program to fix problems with Windows and keep Windows running fast.

It is a good program for users who run out of RAM on their PC, and want to quickly releasing wasted RAM with a click of the RAM Optimize button.

I also do not need to close all my programs before running Memory Mechanic optimization task.

After running iolo Memory Mechanic, Windows Apps like Cortana use up a lot less RAM like less than 1 MB of RAM.

Launching iolo Memory Mechanic is very fast because it takes only a few seconds to fully load after clicking on Memory Mechanic’s Desktop shortcut on the Windows Desktop or Startmenu.

I like the Red and White user interface of iolo Memory Mechanic, and the useful description text on the program itself. The text on the programs tells you how RAM defrag/optimizations make your computer more stable, and faster. There are also before and after pie charts which show you your used and free memory levels, and amount of free ram which got recovered after Memory Mechanic finish defragging your RAM on your Windows PC. I also like the tab user interface which appears after I click the optimize button on Memory Mechanic. There is a tab for Current Memory Usage, Defragment Memory, and Summary. When you click on the next button on Memory Mechanic it will bring you to the Defragment Memory, and when your Memory is finish defragging, Memory Mechanic will show the final tab which is the summary tab which display a Pie chart on how much RAM you have reclaimed before and after running Memory Mechanic.

I recommend running iolo Memory Mechanic after you a lot of programs, or if your computer is feeling slow after using a lot of programs. Before you start the Memory Optimization task, I recommend you save your work just in case something goes wrong during RAM optimization .  But, I have not experience any problems like freezes, and computer crashes when using Memory Mechanic, but it is best to save your work before you begin any system maintenance tasks to prevent data lost.

Closing un-used programs, games, and files may free up even more RAM before running the Memory Mechanic Optimization program.

Pressing the Optimize button in Memory Mechanic will reclaim wasted RAM from Program Memory Leaks, and Crashes. I usually claim a few MBs to a few hundred MBs of wasted free RAM depending on how many programs I have running in the background, types of programs I have open, how long I have been using my PC, and what version of Windows I am using on my PC.

Clicking on the Close X Button on the top right corner of iolo Memory Mechanic will close the program, so it is not running in the background using up RAM, and CPU resources when I do not need to use it. Memory Mechanic uses under 10MB of RAM according to Windows 10 task manager program. There is also a Minimize button on the left side of the close button, so you can minimize Memory Mechanic to quickly use it again to re-optimize your RAM when your computer is feeling slow, or using a lot of Memory.

You can download iolo Crucial Memory Mechanic at http://crucial-memory-mechanic.software.informer.com/

I tested the program in Windows Vista, 7, and 10, and it is compatible with the versions of Windows I used it on.