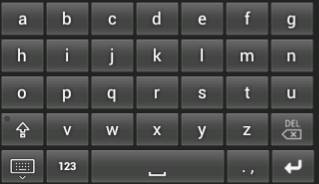 Simple Large Button is a very lightweight keyboard app with a simple English alphabetically ABC… order keyboard instead of the more complicated standard QWERTY keyboard layout. It has numbers like 1,2,3 and special characters like . , !, # on its keyboard app.

I think this app is good for users who are more used to the Alphabet instead of the QWERTY layout of ordering keyboard letters, or users who type one letter at a time by finding each letter on the keyboard, or use a stylus to type.

There is a QWERTY layout which you can use by pressing on the q key on the bottom of the keyboard if you prefer using QWERTY over the Alphabet key layout.

Typing with an Alphabetical ordered keyboard is very accurate especially on Simple Large Button Keyboard App with its larger buttons.

The large buttons make typing on the keyboard easy even for user’s with larger fingers.

Simple Large Keyboard file size is only 43K to download from Google Play’s App store. It also works with very old versions of Google Android 1.6 and up.

When using Simple Large Keyboard, it is very reliable, and does not slow down, freeze, or crash when using it to type text on Google Android.

There are no un-needed bloated features like sounds, suggestions, auto-correct, swipe typing, etc. Simple Large Keyboard is a great basic keyboard app for people who just want a simple keyboard app which they plan on mainly using for just typing out text by tapping on each individual button one at a time. It also does not any settings you can change after you activated Simple Large Keyboard in the Android Keyboard and Input settings section in Google Android Settings App.

The keyboard app is very fast, and lightweight. It uses very little RAM, CPU resources, and internal storage on my tablet. The keyboard appears very quickly after I tap on a text box like the address bar on a web browser. The text I type with this keyboard also shows up quickly after tapping on a letter button on Simple Large Button’s keyboard buttons on the app.

I like the simple design of the keyboard app with big buttons which make typing on Simple Large Button Keyboard very easy to do. The white text on the light gray buttons are easy to read even in the dark rooms. I like the thin black borders around each button which makes the buttons easier to see in the dark, and makes typing more accurate because I can see the borders for each letter button.

Simple Large Button is a fast, simple, and reliable keyboard App for Google Android. It works great on older devices with less RAM, less storage and a slower CPU.