by Johnson Yip on September 25, 2015
in Computer Parts, Google Android 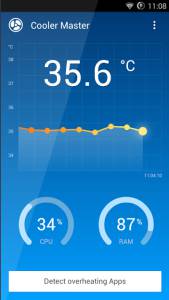 At the end of the Background App Stopping task, Cooler Master shows you some tips to keep your phone from overheating. After closing background apps in Google Android, and leaving my smartphone on a cool surface like on top of a glass table or metal storage box, my tablet does drop a few degrees Celsius in a few minutes.

By making your smartphone and tablet run more cooler, my device should last longer, use less battery life, and run faster because heat is not overheating, and damaging my device, and causing problems like slow performance because my device’s CPU is slowing itself down when it is overheating. My battery life should also improve because fewer background apps are running, so the electricity in my device’s battery is not being wasted running background apps which are heating up my device.

I like the modern blue user interface of Cooler Master, and the animations look nice as well. I also like the sound effects of Cooler Master when I use the App. It is possible to turn off the Sound Effects if you don’t want to listen to them. In the settings, you can also switch the Temperature Unit for the Device Temperature graph between Fahrenheit/F and Celsius/C. You can also add apps like a homescreen launcher, instant messaging, and keyboard app to the whitelist to tell Cooler Master to not stop apps which you don’t want it to stop. You can also turn on Long Lasting Cooling mode which lets Cooler Master completely close overheating apps to stop them from re-launching again to offer 50% more effective cooling. You can also change the language of Cooler Master, share it, read the help files, and see its version, and check for updates with the settings.

The performance of Cooler Master is very fast. It quickly opens when I tap on its shortcut launcher on my Homescreen. It also finds background Apps running on Google Android, and stops them from running very quickly. The Temperature, CPU, and RAM usage graphs also updates quickly in Real-time. Cooler Master is also very reliable, and rarely crashes, or freezes when I use it in Google Android to view my device’s temperature, and to stop background apps from making my device hotter.

Cooler Master works for Google Android 2.1 and up, and it has over 1 million downloads on Google Play at https://play.google.com/store/apps/details?id=com.easyx.coolermaster