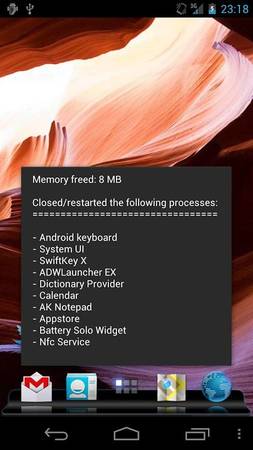 Fast Reboot is a free  simple to use App which simulates a restart by closing, and restarting apps which are running in the background of your Google Android device after you tap on the Fast Reboot icon on your homescreen, or All Apps section of your launcher. Fast Reboot does not actually restart your device, so it it is faster than restarting your device which can take many minutes.

Fast Reboot only take a 1-2 seconds to complete because there are no complicated menus, animations, ads, or buttons which can slow down Fast Reboot. After Fast Reboot finishes closing, and restarting your background apps, it will display a gray list with white text of Apps which it closed and restarted, and how much memory it freed. I usually free around 100-200MB of RAM out of my 1024MB of RAM which is on my Asus Nexus 2012 tablet. Closing, and restarting a lot of background apps makes my device feel faster, and more responsive.

Fast Reboot file size is very small. Its file size is only 31K. Fast Reboot also supports App2SD, so you can move it to your SD card instead of internal memory storage to save space on your internal storage drive.

Fast Reboot also is very stable, and always work when I need to use it in Google Android. I like the Green circular shortcut icon with the restart symbol. The icon makes it easy to find Fast Reboot in my Launcher.