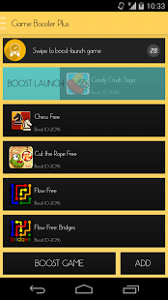 Game Booster Plus is a game boosting app which work on Google Android smartphones and tablets. It makes games run faster by freezing background programs while you use it to run games. Freezing background programs will free up RAM, and CPU resources on your Android device. Whan I use Game Booster Plus, I notice  games load faster, and I also get better frame rates, fewer dropped frames, faster video gameplay, fewer freezes, and less crashes when playing more system resources intensive games like Gameloft’s Asphalt 8 in multi-player online mode on my Asus Google Android Nexus 7 2012 tablet with a Tegra 3 CPU, 1GB of RAM, and 16GB of storage space.

Using Game Booster  to stop background apps while gaming or using other non-gaming apps would also increase your battery life since some Background Apps like social networking and chat apps sometimes use a lot of battery power because they are always running in the background when your mobile device is ON.

Game Booster Plus automatically detects games to add to Game Booster Plus’s games app folder. You can also manually add games which Game Booster did not detect, and you can remove games from its app. I use Game Booster Plus as an app bookmarking tool to easily find my most used games, and apps instead of searching through the All Apps section of Android which may have hundreds of Apps which I installed, but rarely use.

I like the yellow and black flat colored theme of Game Booster Plus user interface. The stacking animation when scrolling down my games’ list in the app is pretty cool.

I can also add non-gaming Apps like web browsers to Game Booster Plus to improve the speed of non-gaming apps by freeing up RAM, and CPU resources which was used by background apps.

Game Booster Plus download size is only 1.9 MB, so it should download pretty fast even on a slower internet connection.

Game Booster Plus is a great app to use to boost the performance of your games, and also organize your game apps and non-gaming apps which you use a lot.

You can download Game Booster Plus for Google Android 2.2 and up at Google Play at https://play.google.com/store/apps/details?id=com.badlab.gameboosterplus

You can also upgrade to the paid version once you installed the free version. The paid version of Game Booster Plus will remove the advertisement, and boost your games even more.