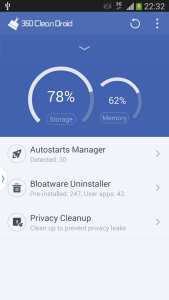 360 Clean Droid is a simple to use System Utility App with millisecond boosting technology, advanced trash cleanup, and privacy cleanup features for Google Android. It can cleans GBs of junk files off your phone freeing up a lot of free space, and also boost your memory for faster performance on your phone. It is very easy to use, and only takes one tap on the clean button, and a few seconds to clean and boost your mobiles memory. There are also easy to use tools for removing unwanted bloatware, and stopping startup programs which slow down your mobile.

It also protects your privacy for scanning for private data which is safe to delete like chat logs, and search engine searches. After installing the App from Google Play, and launching it, it starts a scan to boost memory, and remove junk files. You can click clean, or select which junk files you want to keep, and boost your memory. Most tasks like cleaning, and uninstalling apps just need one tap of a button.

The scan and clean times are very fast because it only takes a few seconds to complete. I like the nice looking, and easy to use user interface for 360 Clean Droid. The Chart for showing used storage, and used memory is useful to seeing the storage , and ,memory usage of my tablet.

360 Clean Droid will scan your Android smartphone, or tablet for junk files like cache files, ad files, and privacy history which are safe to delete from your mobile device. It also search for big files, and APK App installer files which take up a lot of space sometimes. 360 Clean Droid also removes your chatting history which you don’t want to keep which protects your private information like searches, texts, chat logs, and IMs. I like that it also scans for pictures and videos in the privacy scanner, so I can remove private pictures, or pictures which apps downloaded which I don’t need anymore.

There is also a memory booster in 360 Droid for stopping un-wanted background apps for faster performance when running other types of Apps like games, web browsers, and social networking apps.

If your Android device is rooted, you can also use 360 Clean Droid to stop startup apps to make starting up faster. It also has a Uninstaller to uninstall Apps which are installed on your smartphone or tablet. You need to root Google Android to uninstall System and pre-installed Apps which came with your Google Android device. If your phone or tablet is not rooted, you can still disable some system apps like YouTube, Gmail, Maps, etc to free up RAM, and some space.